Today marks the final Vengeance MP preview before its July 1st launch, and you can find Chicago Regional reminders below!

This weekend’s Regional (hosted by Nerd Rage Gaming) takes place at the Crowne Plaza hotel in Rosemont, IL – preregister here. Players attending Organized Play events should be be fully familiar with the Tournament Guide and CRD. You can also save time by filling out your Deck Registration Form in advance. I hope to see you there!

Vengeance drops next week, and our last MP reveal is sure to make a huge splash! 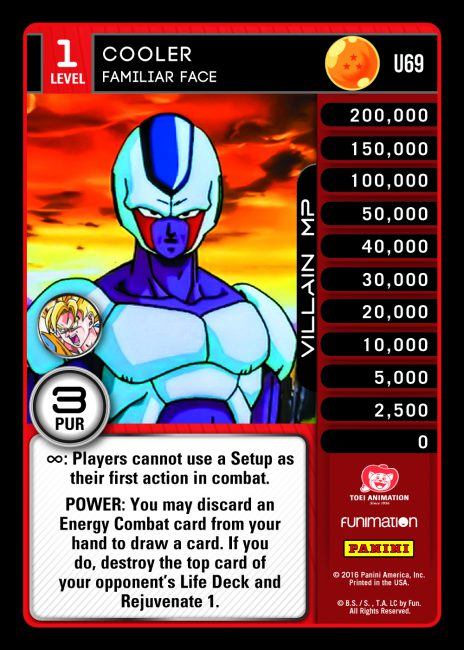 Cooler’s abilities on Level 1 offer a great deal of flexibility, while also providing an inherent advantage against threat-light decks. The Constant Power will create awkward scenarios for control decks, and his activated Power generates +/-2 in the Life Deck race.   Cooler’s Powers require a high count of Energy Combat cards, though both of his named cards form a strong base for any deck.

Cooler – Transformed gains anger after taking un-prevented damage, which can mitigate the -1 anger from a Crit. His Power continues the Rejuvenation theme, with a high value 5 life card/+2 Rejuve attack. On HIT, you’ll be able to further sculpt your hand.

Whenever you arrive at Cooler Level 3 (whether advanced or lowered), you’ll be able to Rejuvenate a card from the Banished Zone. If your deck is based around specific cards for a combo or DBV, hopping up and down to Cooler Level 3 can ensure that your required pieces will always be live. His Constant Power also adds extra durability, and the Rejuvenation will occur even against attacks dealing a few stages of damage.   Similar to Level 2, his attack is dripping with value – dealing 6 Life Cards and Rejuvenating 3.

While Cooler – Overlord’s activated Power may only be used once per game, it is perhaps the strongest effect ever seen on an MP. A guaranteed combat-ender can greatly expand tactical options at the end of the game, and Cooler’s Life Deck will grow by 8 cards (including Level 3’s effect) whenever he is near death.   While waiting to pop down, the Constant ability provides more Rejuvenation – and decks with consistent access to anger are able to extend the game even further. 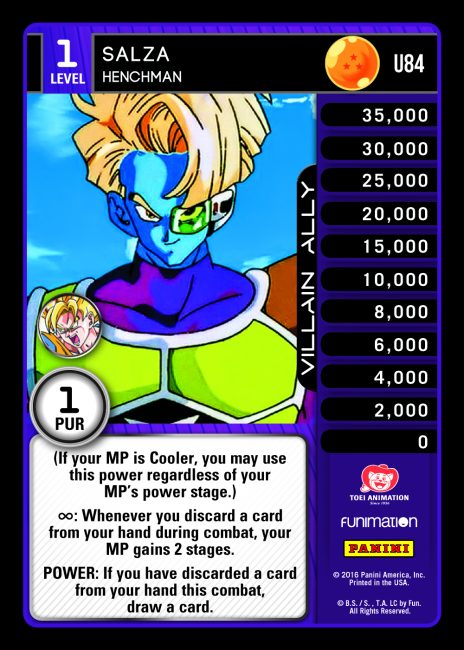 Salza has applications in any deck with a permanent discard outlet, but truly shines with Cooler. Aside from consistent stage gain, Salza combines with Cooler’s Level 1 to create a filtering/card draw engine – which can be expanded upon even further in several Styles!

Cooler’s Supernova has a reasonable vanilla output of 6 life cards for 3 stages, with unpreventable damage and +2 anger. It’s real utility comes from the discard pile, as it Rejuvenates itself to offer “when entering combat” removal of cards like Visiting the Past or Orange Steady Aura Drill.

Cooler’s Rebirth packs 3 Endurance, and against less aggressive decks it can always be pitched to an early Power to Rejuvenate itself. When actually played, it adds three cards back to your deck – itself, and two banished Styled cards. From there, it can serve as extra defense by being banished for Endurance – or you can use a Power to draw it right back!

Cooler is hard to kill, and his high value effects/ filtering abilities lend themselves well to decks that thrive over multiple combats. While his Rejuvenation and combat flexibility are most inline with a more midrange build, his unique ability to recur cards from the Banished Zone allows for intriguing combo possibilities. Please look forward to utilizing Cooler in a variety of Styles, and prepare yourself for Vengeance on July 1st!