Hi folks! Check back throughout the day for coverage from the New York Regional at Brother’s Grim Games & Collectibles!

Round one is nearly complete, with a grand total of 165 players on the day. Approximate meta breakdown:

Round 3 is underway, and some fringe builds have jumped out to an early 2-0 start. We’ll have to keep an eye on them as the day progresses! 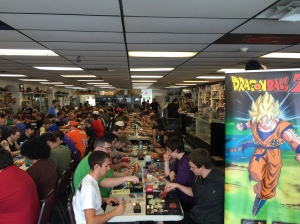 Round 4 is about to begin, and we have an undefeated Saiyan Vegeta up on stream! Check it out here:

Round 5 stream update: Take a look at a rather unique Blue Nail build on the stream! Three rounds remain, and several rogue builds are still in contention.

Round 7 stream update: Red Garlic Jr. takes on Black Ginyu in a battle to stay in the hunt for T16!
—–

Champion: Namekian takes down its first regional win of the season, piloted to perfection by Ryan Krueger!