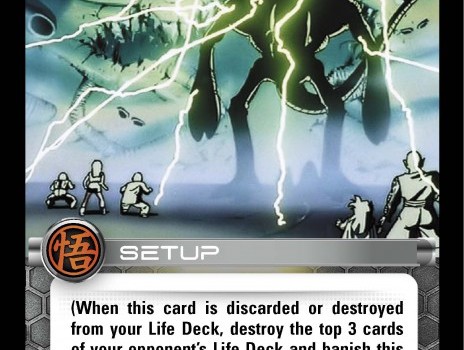 Dr. Wheelo is an intriguing character, and not just because he is a gigantic brain.

On Level 1, activating his Power will always be +EV in the Life Deck race. Setting your anger to 3 ensures quick leveling, which allows you to shed the low PUR and self-damage. 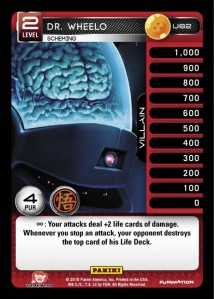 Dr. Wheelo – Scheming is a master of controlling combats. The more actions that take place during combat, the more likely that Wheelo’s Level 2 is generating value. Cards that provide consistent blocks like Blue Protective Mastery and Orange Burning Aura Drill are especially useful here. At the same time, miscellaneous tech cards turn into a stream of pokes dealing +2 Life Cards at a time. 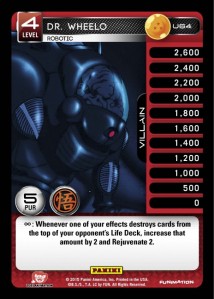 Dr. Wheelo Level 3 boosts the effects of effects like Black Foreshadowing and Orange Destruction, and landing an attack can generate a net +/- of five cards. If you are able to reach Dr. Wheelo – Robotic, your destroy effects can close out the game while Rejuvenating.

Dr. Wheelo’s Revival is one of the most powerful Named cards in the game, and it further augments his knack for controlling the pace of combat. When it’s not locking down Events, it’s also happy to banish for three discards (or more!). In the late game, you might even be want to destroy cards from your own Life Deck in order to make sure it triggers.

Dr. Wheelo’s History piles on even more deck destruction, and adds some flexibility with the option to level down. On Level 2, you might pop down to mill for five, activate your Power on Level 1 for some additional mill, and then quickly anger back up to Level 2. With Red Enraged Mastery, that sequence would also draw a card!

Orange Extension is one of the few ways to play a drill during Combat, which allows for some flashy plays with Devouring Drill. Black Entrance gives you a three turn window to peek at the opponent’s hand, which works well with cards like Black Daze and Black Chaos. 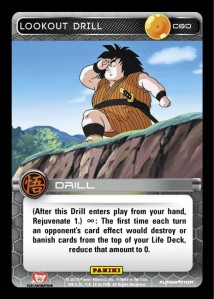 Lookout Drill provides some general utility in all matchups, while also allowing you to shore up your deck against an MP like Wheelo. Blue Dominance opens up a new style of Blue control, especially when used in combination with Blue Escaping Drill.

Yajirobe disrupts control decks on a level nearly similar to Nappa, but with the upside of being able to unlock your own Setups.

Please look forward to using Dr. Wheelo on July 3rd, and check back next week for a full breakdown of Garlic Jr. and Lord Slug. Until then, you can find more previews at the following fan sites: