There’s no two ways about it – Saiyan has been the least represented Style at every Regional event this season. Everyone is curious to see what Saiyan can bring to the table in the next set, and the poll reflected that loud and clear. Thanks to anyone who was able to vote!

Throughout the design process of Dragon Ball Z: Evolution, Saiyan had its strength enhanced in numerous ways. However, special attention was given to making sure that the upgrades were reasonable, with an emphasis on providing Saiyan tools to answer the modern metagame. Equally important, the new Mastery needed to be playable in a way that did not completely invalidate the tactics of Saiyan Empowered Mastery.

The Constant ability means that you’ll only need 17 anger to win the game by MPPV, but even a beatdown deck can expect to level up regularly with this effect. The difference between this static reduction of the anger threshold and simply “gain an extra anger each level” is astounding. Saiyan Rampaging Mastery is able to recover from anti-anger effects with quick bursts towards the reduced threshold, which greatly changes the flow of offense.   At the same time, all of your Styled Attacks gain the ability to raise your anger with each hit. Playing more attacks means dealing more damage as you level up – to deal more damage! Note that the anger gain is optional, so you’ll never be forced to level (a common pain with the old Mastery).

On top of all that, this Mastery also allows you to turn any card with Endurance into an attack from your hand. This allows you maintain a higher threat density, and  you’ll always have the potential to apply pressure in any given combat. If a situational card with Endurance shows up as damage, it served its purpose. If it shows up in your hand, you have the option of activating your Mastery to make an attack.

Either way, you’ll still have several key decisions to make when constructing your deck. A large amount of Endurance can create a brick wall with some flexibility during combat, but it will come at the expense of the flashier effects. A more MPPV oriented build can certainly afford a smaller Endurance package while enabling Mastery attacks, but how does that ratio look for a deck with a normal block package? There’s a lot to unravel here, and it’s up to your individual playstyle to go off book and forge a new path towards the optimal builds.

In the coming weeks, you’ll see several new Saiyan cards that interact favorably with the new Mastery (and some that are more useful with the old!). You can expect effects that reward you for discarding a card from your hand, as well as some narrow (but devastating) tech cards with Endurance to otherwise pitch for an attack. Some examples include:

Saiyan Interruption finally gives the Style a tool to catch an opponent in bad combats. In the current competitive landscape, decks have been able to cheat on block counts due to their efficient ways to control combats. While those tactics will certainly retain their value, Saiyan now has an extra weapon to punish any decks that are being a bit greedy with defense. The effect adds insult to injury by forcing your opponent to skip his next action, ensuring that the outcome is as painful as possible for anyone trying to flee. In matchups where combat ending is not relevant, it cheerfully backs up as a solid stage damage attack. That’s good, especially if a lot of Android 18 decks are present.

Saiyan Inspection Drill will most often be used as an Endurance pitch to your Mastery and cycle a card. However, the Drill itself has various unique uses to pierce cards like Orange Burning Aura Drill or trigger other “HIT” effects. 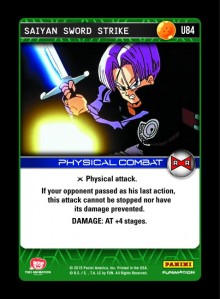 Saiyan Sword Strike is the one many new “hard to blockables” – conditional attacks that become harder or impossible to block based on a given deck construction. This attack in particular punishes passive decks, while generally rewarding Saiyan for keeping up the pressure. 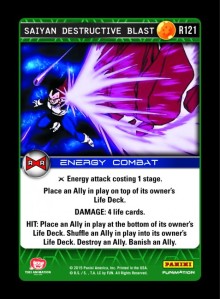 Saiyan Destructive Blast guarantees to answer at least one of your opponent’s Allies, and the HIT effect should clear out any stragglers. Of course, you could always combo some of the removal effects on your own Allies…

Trunks is paired with the Saiyan Starter Deck, and he brings a great deal of heat to the table. 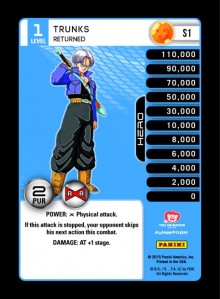 Trunks Level 1 has applications in numerous Styles. Whenever a stage modifier is present, his attack Power can generate troublesome pressure for the opponent. It’s easy to envision scenarios in which your opponent must draw two physicals blocks or be unable to perform any energy attacks for the entire turn. 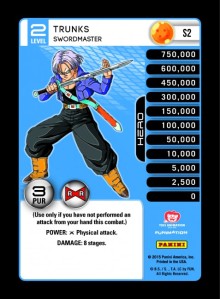 On Trunks, Swordmaster, you’ll gain access to a powerful physical attack. The differentiation in usefulness between direct stage damage and “AT +” attacks will be more important than ever in the upcoming environment, and a huge shot like this is always welcome. It can be a bit tricky to pull off with proper timing, but then again you might want to be running the old version of his Level 2 in the first place – though you could also Sword Stance from the old Level 1 into this Level 2 nicely!

This effect is Visiting the Past on steroids, giving you quick access to any attack in your discard pile and creating an immediate opportunity to utilize it. This can recycle removal to cripple control, grab defensive oriented cards in certain decks, or just hit really hard. Despite this card’s obvious playability, it still requires thoughtful application. The decision to use Trunks, Defiant or Trunks, Energy charged will be one of the key starting choices of any new Trunks brew.

Trunks Level 4 keeps things simple, especially when the match simply ends. A massive damage modifier provides a lot of value if it utilized early into combat, so leveling up into this provides an interesting alternative to the “when entering combat” effects of his old Level 4.

On a final note, you may have noticed some changes and improvements to the card templates. Setups and Drills in this set feature a horizontal presentation (makes them easy to notice as dead cards on defense!), and the general ordering of card effects has been revamped. Now, the steps of each card are separated onto individual lines – in the exact order that each effect should take place. You’ll also notice that Endurance has been removed from the text box, and it is now represented by a logo similar to PUR (see bottom right of Saiyan Inspection Drill).

The first piece of the puzzle is on the board, and things will only ramp up from here! Please look forward to utilizing the new Trunks MP set, and try to find your ideal combination of MP levels. Also, I hope the Saiyan Mastery was worth the wait (and wait until you see what else it has left to be revealed)! On Friday, you’ll get your first taste of the Red Style – along with Android 17 and both of his Named cards. Until then, make sure to stop by the following fansites for more previews leading up to the October 30th release:

15 thoughts on “Trunks and Saiyan Rampaging Mastery: A Link to the Future”