After Dragon Ball Z: Evolution drops on October 30th, Android 17 will make this Halloween more terrifying than ever! Buckle up.

Android 17 goes out of his way to make sure that other warriors respect the bushido code, and this is reflected in his general playstyle. Allies are a natural counter to physical beatdown decks, but 17 has a knack for keeping the board clear.

His Level 1 Power is oozing with value, regardless of the matchup. First, it pokes for solid damage with an AT + 1 attack (on a Level that spends most of its time in the C/D brackets).

You can use Android 17’s Van to run over any Allies, clearing a path for your stage damage. However, it still has a purpose in matchups where the removal is not relevant.

Android 17 gives consistent access to the van, which itself gives guaranteed access to any one Android Ally, even if banished. Android 18 is the most likely target, as she enables 17 to keep up offensive pressure by pitching dead cards.

With another attack on Level 3, Android 17 becomes the first Villain personality to have three consecutive attack Powers. If you managed to hang on to a copy of Android 17’s Van, the free Energy Attack for 6 becomes a guaranteed crit if unstopped. 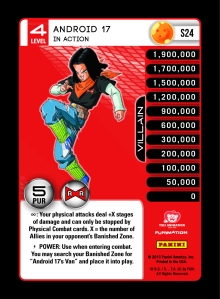 If you manage to reach Level 4, whatever is left of your opponent’s deck will quickly evaporate (another example of the “hard to blockable” effects present in this set). You can also hop back into the van each turn to ensure that 18 is online, or perhaps begin comboing it with some of your own Allies…

Whenever you find time to stop using the van, there’s also this gem: 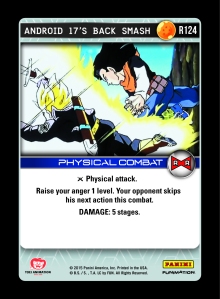 Android 17’s Back Smash is an homage to the Back Bash of old, and its effect is far better positioned in this iteration of the game. This is a brutal card to lead combat with, and the fact that it does direct damage instead of AT is a huge boon.

Android 17 is paired with Red in the Starter Decks, and his aggro playstyle goes well with the new Mastery.

The Instant Power of Red Ruthless Mastery requires a heavy investment in Styled physical attacks, but the damage output is huge. Consider something simple like an AT + 4 attack from Turles in the first combat of the game – it would deal at least 8 stages of damage!

Red Ruthless is also the second Mastery in the game to have an anger lowering effect. As mentioned earlier, one way to get away with a small physical defense package is to rearrange stages on Allies. When it comes to Ally removal, Red has an embarrassment of riches. The next common problem that many physical beatdown decks face is the issue of your opponent leveling up. Stage damage already requires incremental chunks of advantage before any kind of pay off, so it can be frustrating when your opponent takes an attack or two and then advances into ten new stages. Red is now able to apply offensive pressure while also ensuring that your opponent does not have an easy path to leveling.

The second Power allows you to play the top card of your discard pile, as long as it is an attack. Outside of the general offensive consistency, this allows you to run a lower amount of tech cards with the goal of recurring them as needed in a given matchup. You’ll also see other cards that interact favorably with this effect, such as Red Forceful Strike:

You should also pay attention to any cards that allow you to banish things from your own discard pile, as that is an easy path to set up your top card. At the same time, there are a few Red cards that benefit from being banished:

Red Quick Jab is a great target to banish with something like Red Smash, but you can also simply discard it at the end of a turn and banish it with your Mastery next combat.

That’s all for now, but you can look forward to more MP/Mastery breakdowns starting next Tuesday! In the meantime, take your last chance to prepare for this weekend’s Florida Regional – and watch for more previews from the following fan sites:

8 thoughts on “Android 17 and Red Ruthless Mastery: Playtime Has Ended”