The final Starter Deck MP has arrived – check out Piccolo and the new Namekian Mastery below!

Piccolo – Composed provides an interesting alternative to Piccolo – Stoic. In a deck utilizing  Namekian Knowledge Mastery, you’re giving up 1 guaranteed anger (and an attack) for the potential to quickly burst up to Level 2. In other Styles, this Level 1 can lead to a steady stream of anger in a way that the old Piccolo cannot match.

On Level 2, you’ll gain access to a sizable +4 attack that allows for some minor deck manipulation. If an opponent declares combat, Piccolo’s Power can grab a Styled Setup or Drill to draw into on your next turn. Being able to place cards on the bottom of your Life Deck also has uses with several Red cards. Most importantly, it goes well with Namekian Restored Mastery – more on that later. 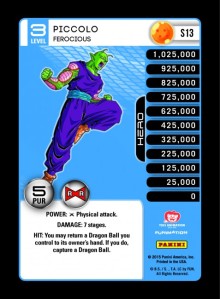 Piccolo – Ferocious has another attack, this time with an impressive 7 stages of damage. On top of that, you’ll also gain some extra field control with the ability to return/capture Dragon Balls.

On Level 4, Piccolo obtains total control over Dragon Balls. Aside from sealing off immediate effects for your opponent, you’ll also be able to search out any Dragon Balls that have been banished (through happenstance, or your own effects!). Meanwhile, it will be difficult for your opponent to capture through Critical Damage due to the Endurance buff.

Namekian Restored Mastery is extremely consistent. At the end of each turn, you can essentially trade a card from your hand for whatever is on the bottom of your Life Deck. Furthermore, the swapped card can be stacked on the top or bottom of your deck – leading to certain combos or simply a generally nice flow of draws.

Beyond that, the Mastery also guarantees +2 anger in every combat. Namekian has few ways to raise anger outside of its Mastery, so most builds will want to augment this ability with other non-Styled anger raisers. Finally, it also allows you to filter a card from your hand each turn! This increases efficiency during combat, and gives an outlet for the myriad of “return a Dragon Ball to hand” effects in Namekian. It also shuffles your deck, allowing you to switch up what you might see on the bottom at the end of a turn. Choosing when to activate this Power can be tricky, as you might be shuffling away access to a Dragon Ball that was knocked to the bottom of your deck.

Namekian Leaping Kick has uses across the board, but it is especially nice with Piccolo’s Level 4 Power.

Namekian Energy Assault provides another way for Namekian Knowledge Mastery to reach its Dragon Ball threshold, while acting as a Styled version of Overpowering Attack for Restored. 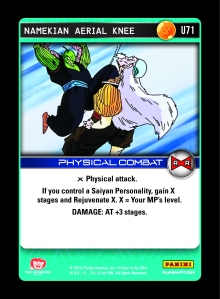 Namekian Aerial Knee has obvious applications with Gohan, though another MP in the future will also have access to both Saiyan and Namekian heritage…

That brings us to the end! Don’t forget that the Coloroado Regionals take place this weekend, and you can save time by pre-registering and filling out your deck form in advance. Early next week, the new CRD and v2.0 of the Rule Book will be uploaded. You can also look forward to the final previews before release, including Android 19 and the Ultra Rares!

One thought on “Piccolo and Namekian Restored Mastery: Dragon Power”