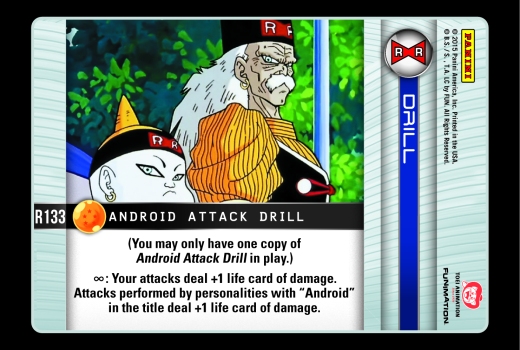 The CRD has been updated to version 4.1, and you can download it here.

The following questions from the community have been compiled by the DBZ TCG Wiki:

1) Does Saiyan Sword Strike look at your opponent’s “last action” from the previous combat if he has not had an action this combat yet?

Saiyan Sword Strike is updated in the new CRD (“last action this combat”).

2) If Black Entanglement banishes Red Premonition, can Red Premonition’s contextual effect still be used to banish it (from and to the Banished Zone) to search the Life Deck for a Styled event?

No, Black Entanglement’s effect takes place in one sentence (Red Premonition’s “when revealed” effect would be too late).

3) If you would advance a personality level by a card effect (e.g. I’ll Dig Your Grave) when already on level 4, do you set your power stages to full?

No (per Rule Book 2.0, you would only power up to full if you would level up due to raising your anger).

4) If Black Wilt is used to modify Piccolo, Combat Stance’s destroy effect, is it placed on the bottom of your Life Deck after Piccolo rejuvenates 2 with his power?

Yes. Black Wilt must be announced/played before beginning to resolve a sentence with the “Destroy” effect. You would activate Piccolo’s Power, play Black Wilt, discard a card from your hand, and continue resolving the Power from there.

5) Goku, Motivated reads “Players cannot use effects that would cause that Ally to leave play this turn.” If the Goku player controls exactly 2 allies, does it protect the Ally that was not chosen by prohibiting the “Banish 2 Allies” effect of Android 17’s Van entirely?

Android 17’s Van would be able to be used, but not banish the Ally chosen by Goku. The other Ally would be banished.

Everything would be destroyed as usual, except the chosen Ally.

7) How does Blue Entertaining Drill interact with It’s Over 9,000! ? Tenshinhan’s Preparation’s CRD entry seems like a relevant precedent.

The drill would be discarded (as your anger is raised 6 first, then your opponent). If the drill was able to remain in play through some effect, you would be able to lower your opponent 6 stages instead.

9) Blue Entertaining Drill + Gohan ally. If you would raise your opponent’s anger by 2 or more, does the “stage loss” replacement effect apply before Gohan “changes the amount to 1”?

Gohan changes the amount to 1 before you choose for Blue Entertaining Drill.

11) Blue Kiss allows an Ally to attack in your next action. If an opponent uses an effect that causes the user of Blue Kiss to “skip” his next action, does the effect of Blue Kiss carry over to the next action actually used, or do cards like Saiyan Gut Kick act as a hard counter to this type of effect?

If your action is skipped, any “next action” floating effects would apply to the next action you take after being skipped.

Red Smash banishes the chosen cards simultaneously. Red Quick Jab would need to already be the top card of your discard pile.

13) Hero Vegeta’s powers allow you to replace discarding one card by revealing the card instead. How does this interact with…

13a) Orange Possession Drill (can you reveal a Drill)?

Yes, you would be able to reveal a Drill instead of discarding it (otherwise, discard 2 cards). Whenever exactly 1 card would be discarded (regardless of any requirements for a certain type of discard), Vegeta may reveal the card instead.

The parenthetical attacks performed by Orange Distracting Drill and Saiyan Interruption cannot be overridden or superseded by Vegeta’s effect (per Rule Book 2.0). In order to perform the attack, the card would need to be discarded.

13c) Effects that read: “Discard a card from your hand. If you do…”

If you did not actually discard a card due to Vegeta revealing it instead, any “if you do” effect contingent upon the discard would not take place.

14) If an attack cannot have its damage modified, can it still be affected by an effect that changes its life card damage into stages?

Yes, you would still be able to perform the conversion. Damage modifiers are only “+” or “-“ effects that increase/decrease stage damage or life card damage.

15) To trigger effects like Black Amusement Drill (whenever your opponent reveals his hand), must he reveal his entire hand or would revealing a single card from his hand also trigger this context? (Specifically in context with Black Signal and Red Ruthless Mastery)

Black Amusement Drill only interacts with effects that “reveal” your opponent’s entire hand, not a single card.

16) When exactly is Black Wilt used? Can you wait until you see the cards destroyed by your effect before you play Black Wilt to increase it by 1?

Black Wilt must be announced/played before beginning to resolve a sentence with a “Destroy” effect.

18) Do you need to actually gain stages to trigger Piccolo level 1’s contextual effect? Scenario: You are already at full and activate Namekian Fusion or play a Black Finger Block.

Piccolo must actually gain the stages in order for his effect to take place. For example, your opponent plays Saiyan Upward Kick. You use a card with an immediate effect of “gain 2 stages.” You do not actually gain the stages, and Piccolo’s Power does not raise your anger 1 level. Similarly, playing a card effect that gains stages while at full would result in no anger being gained.

No, Piccolo must actually gain 1 or more stages.

20) Villainous Empowerment searches for Black Learning Drill. Drill can not be used; can the first part of Learning Drill’s constant effect (naming a card in play) be used while it is entering play?

Black Learning Drill would not be able to name a card. It would remain in play, without affecting any cards.

21) With Saiyan Acute Rapid Slam’s floating effect (Energy Combat attacks that are not banished after use are placed at the bottom of the Life Deck after use) and Crushing Beam’s immediate effect (Shuffle into your Life Deck after use)… Do you apply both effects or just one, and if both are applied, can you choose the order?

These are competing timings, the player may choose to place Crushing Beam on the bottom or shuffle it back (not both).

24) If I Nappa’s Confidence an Ally down to 0 stages with Hidden Power Drill in play, the Ally is banished after that sentence (That personality loses 4 stages.) is complete, correct? If the Ally is no longer in play, how does the “If that personality’s power level is 0..” effect work?

The Ally would be banished, and the second sentence of Nappa’s Confidence would have no reference/fizzle.

They are immediately set to 5 stages above 0.

If you use the HIT effect of I’ll Dig Your Grave and you have Hidden Power Drill in play:
After advancing a personality level, your MP is set to full. Hidden Power Drill’s Constant Effect would cause your MP to go to five stages above zero. All of your Drills are then discarded, your opponent advances a personality level, your opponent is set at ten stages above zero, and all of your opponent’s Drills are discarded.

If you use the HIT effect of I’ll Dig Your Grave and your opponent has Hidden Power Drill in play:

Blue Fist Smash’s “power stages dealt” refers to the amount of stages dealt during damage calculation. In your example, X = 6.

Correct (compare to Trunks – Bashful with a Constant and Instant Power).

29) If Namek Dragon Ball 2 lowers Lord Slug from level 2 to level 1, does his “when a Dragon Ball enters play” power trigger, or does the level 1 need to see the Dragon Ball begin to enter play as well?

Lord Slug would not gain an anger – after using all the immediate effects of a Dragon Ball, it is then considered in play (per Rule Book 2.0).

30) Korin triggers after taking life card damage, just confirming that an energy attack dealing 0 life cards (e.g. 18’s power) does not trigger Korin (my understanding is that you must actually take life cards of damage).

Correct. After taking actual Life Cards of damage (1 or more), Korin would Rejuvenate 1.

31) If a card is considered to be Named, does it change the title of said card? For example, can Android 18’s Toss or Android Presence interact with Black Back Strike if your MP is Android 18?

33) If I am using Blue Tag Team Mastery and the Master Roshi Ally is in play before his first turn, can I still use the parenthetical effect of my Mastery to search for an Ally or does Roshi shut off that ability?

Master Roshi has been updated in the new CRD. Similar to Lookout Drill, he affects all “effects” instead of all “card effects.” You would not be able to use the searching effect of Blue Tag Team Mastery if Master Roshi is in play.