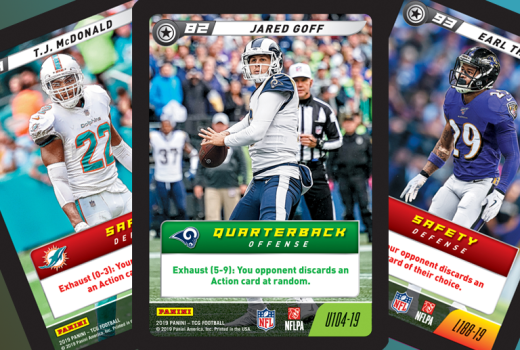 Overtime rules, NFL Five’s Card of the Week, and more below!

“Do you need to move beyond the opponent’s End Zone to score a Touchdown? For example, I am at the 5 yard line and play Draw Offsides (to get to the 0 yard line) – would this be considered a Touchdown?”

“What happens when the second half ends with the score tied?”

NFL Five designer Brian Fahmie has implemented a system in which the “current Overtime rules of the NFL apply.”

After randomly determining which player will start with possession of the ball, set 10 units on the Game Clock. Each player begins Overtime with 2 Timeouts. Each player must have the opportunity to possess the ball once, unless the player that gets the ball first scores a touchdown on the opening drive. In that scenario, the player that scored the touchdown wins the game. Otherwise, the game ends on any score.

While some of the hardest hitting discard effects (such as Patrick Onwuasor) have a narrow chance of success, Jared Goff’s 5-9 range will allow you to consistently discard Action cards from the opponent’s hand. When utilized in a deck with other automatic discard effects (such as Josh Allen or Earl Thomas III on defense), Goff’s ability becomes even more useful – with the potential to lock your opponent out of Actions for the majority of the game! Restricting your opponent’s Action cards can create a huge advantage during On Field Adjustments, allowing you to reliably set up (or deny) a string of pre-planned plays.

Check back on the 18th for the start of our next MetaX giveaway, then head to the Panini Games Facebook page to enter! Also, watch for our NFL Five Halloween giveaway at the end of the month – including bonus prizes for photo submissions!