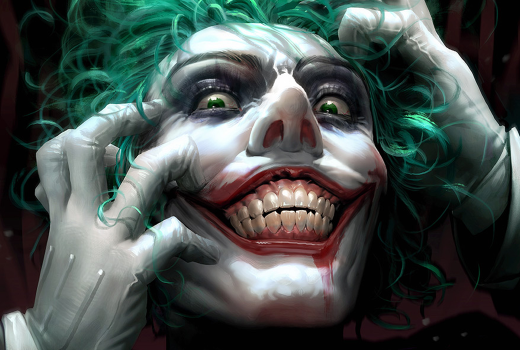 This month’s NFL Five giveaway begins on Friday, and the theme will focus on Quarterbacks! Check back for contest details on June 19th, then post on the Panini Games Facebook page for a chance to win. The three randomly selected contest winners will be announced the 26th – watch for the winners here!

2. MetaX Card of the Week

The Joker – Certifiably Insane (as seen in last week’s poll) served as a prominent card in the primordial metagame, offering consistent access to the VP scoring effects of Former Psychiatrist and Dr. Harleen Quinzel. From there, his relevance increased with the release of Legion of Doom and expansion of the Villain toolbox. After that, he gained novel options from additional Harley Quinn cards in Batman (such as Heartbreaker and Queen of Arkham) – plus new tools like Endless Waltz and 1 Intelligence.

Following up on last week’s NFL Five teasers, you can expect for more previews in the near future – including a detailed introduction to Power Ups and Unique Plays! After the announcement of the next set’s release date, watch for a full rollout of spoilers (along with exclusive first looks on fan sites). Finally, stay tuned for two new Tournament Document updates, with the MetaX CRD (v2.0) and NFL Five CRD (v1.1) coming soon.