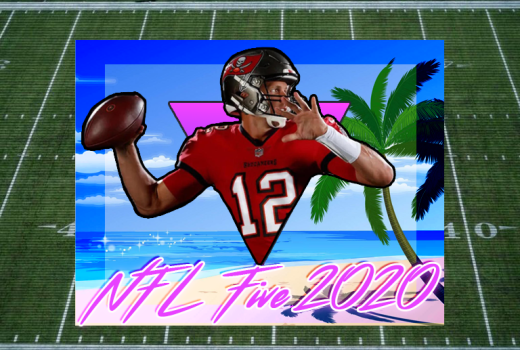 Last week, we revealed the initial details for NFL Five Organized Play – beginning with the 2021 Preseason. The first opportunity to meet up and win an invite is just two weeks away, starting with a Designer Challenge. Be sure to stay in the loop (and find practice matches) on the official NFL Five Discord channel, and refer to the first exhibition match on September 6th for an example of expected webcam play procedures.

NFL Five 2020 has been available for less than a week, but players have already gone wild with new deck-building strategies! Power Ups are sure to find their way into nearly every deck, and L250-20 Christian McCaffrey converts them into extra yardage. Aside from running enough Power Ups to maximize this ability, also look to include Players that draw cards from the Action Deck (or search for Power Ups directly) – as well as effects that can disrupt the opponent’s ability to discard your Power Ups from play.

There are three Preseason events taking place in September, and you can expect tournament coverage (including Deck Tech submissions) throughout the month. September will also bring a new NFL Five 2020 giveaway – featuring a theme of Combos. After that, watch for another chance to win MetaX Starter Decks (and stay tuned for a major update to the MetaX CRD).