Hello everyone! Time continues hurtling toward the release of Heroes and Villains. In just four short weeks, the new cards will be in your hands. That’s only three Mailbag articles from now! With approvals in the final stages, preview cards will start rolling out in the immediate future. Next week, a new “Card of the Week” series will be kicked off with the reveal of a Level 1 MP.  It’s been too cold, but come March the exhilaration of new DBZ matches should warm things up.

“During the early run of the old game we saw wrapper redemptions for promos, is that something that will be coming back?”

There are currently no plans for a redemption program, but it’s something that is frequently requested. It can’t hurt to hoard your wrappers in the meantime . . .

Heroes and Villains does not introduce new Mastery cards – they’ll generally be released in sets that have Starter Decks. I don’t think you’ll see multicolored decks in the near future, if ever. Of course, you can always scratch that itch in the sealed “Rainbow” format. The first time you combo Orange cards with Blue Positioning Drill, you might see Kami.

“I REALLY wanna play Broly as a Main Personality for Saiyan. Can I look forward to this in the future?”

It’s safe to say that you’ll see Broly in the game, but not for quite some time. Broly’s AT damage against the current era of MPs would get pretty wild (because his power is maximum).

”First and foremost I love the fact that you guys have brought back my favorite card game. As you develop other sets, has there been any discussion on bringing back some of the other rules and card types that didn’t make it into Set 1? The three things that come to mind are Empowerment, Focused Attacks and Battlegrounds/Locations.”

Heroes and Villains does not contain any new keywords, so you won’t see Empowerment. Meanwhile, “dual blocks” will always remain intentionally scarce and highly scrutinized. Due to this, Focused Attacks aren’t really necessary. Finally, you’ll see a lot of the functional intent of Battlegrounds/Locations reflected in the Constant Powers of Allies (such as Nappa’s pseudo City in Turmoil effect). There is a lot of this in the next set, and the implementation works well. Battlegrounds/Locations required their own card type, and you had to include specific effects to interact with them on their own axis. By giving those symmetrical effects to Allies (which can be destroyed by built-in game mechanics), a more interactive environment has emerged.

“Traditionally, the DBZ card game has used card effects to end combat. ‘Play only after a successfully played physical or energy attack performed against you.  Blank that attack’s text and end combat.’  That attack does its normal damage, regardless of Endurance.’ Something along those lines could offer some interesting gameplay, as there is a very real payoff to ending combat such as Critical Damage effects. Thanks for bringing back such an awesome game!”

Without question, effects that “end combat” are the most difficult thing to balance. They serve a vital role in the flow of gameplay, as they prevent matches from devolving into mindless attacking. While they have many legitimate uses in a healthy metagame, they can also lead to non-interactive decks. The type of effect you suggested is certainly a way to balance these types of effects. Moving forward, we’ll continue to judiciously integrate ways to end combat without enabling a stasis archetype. 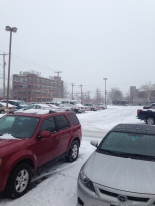 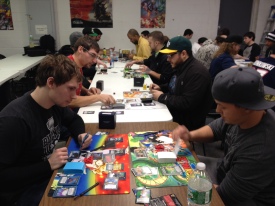 Various tournaments from around the country, not even a snowstorm can stop them!

Thanks to everyone for writing in with your questions and comments. If you’d like your thoughts addressed here, send an e-mail with MAILBAG in the title to dbz@paniniamerica.net. Please include your name and location, and send any rules questions to the same address. With the final days of the launch format coming to an end, I’ll close with this question of the week:

What was the most underrated deck in the Set 1 environment?