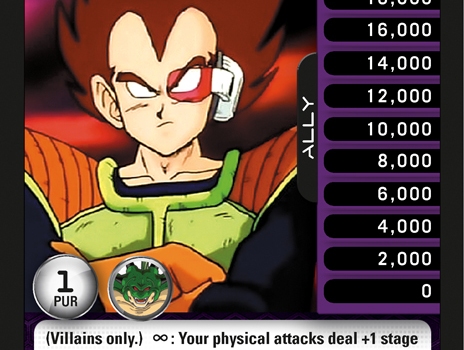 Salutations. It’s been an electric week in the DBZ TCG world, with fresh previews rolling out like there’s no tomorrow. Tenshinhan and Nappa have already stoked the imaginative fire of countless new brews, and there’s still so much more to see! With just a few short weeks remaining until the launch of Heroes and Villains, many fans wrote in with their questions about the expansion.

“G’day from sunny Australia – got a question regarding note-taking.  What’s your views/rules regarding them in casual and tournament play?”

Minor note taking is permissible.  For example, you may jot down an opponent’s hand after playing Stare Down, or keep tally of card types for Black Foreshadowing. Note taking must be done in a timely fashion that does not interrupt the flow of gameplay. In particular, you may not take notes intermittently while using the effect of a card like Black Searching Technique.

“My favorite deck is Saiyan Trunks. It can deal massive amounts of stage damage through its powerful physical attacks. Trunks’ ability gives the deck consistency, and also allows you to change the way that your opponent plays by picking the order of their cards. It also has a good match against Ginyu through its ability to easily get critical effects.”

Turboing up to Trunks Level 3 with Saiyan Empowered Mastery can be very gratifying. Ending the game on Level 4 is pretty fun too! In general, I think Trunks is the kind of character that will continue to improve over time. As decks gain access to an more and more tools, the amount of virtual card advantage generated by his Power will become more noticeable. He certainly gets a big boost in the next set, so keep an eye out for his new card!

“Would there ever be a rule instated that allowed the use of a sideboard?”

As of now, there are no plans to introduce a side deck of any kind. However, it isn’t completely outside the realm of possibility. It’s interesting to think about how it would be implemented, especially when considering the old game’s use of Sensei Decks.

“I just wanted to say how high my anticipation is for Heroes And Villains and I had one question. Do you have any plans to do a deck tech section? If you do I would nominate Orange Vegeta due to its untapped potential.”

A “Deck of the Week” series doesn’t sound like a bad idea – maybe sometime after the release of the next set! In the meantime, let’s think about Orange Vegeta a bit. Right off the bat, Vegeta’s abilities encourage you to give serious consideration to any attack that raises your anger. Orange Rage, Orange Revenge, Devastating Blow, and Enraged Blast are all worthwhile inclusions. While Vegeta’s Anger isn’t much use here, Vegeta’s Galick Gun is one of your key attacks. You can augment those cards with Orange’s wide array of blocks that raise your anger, and Devouring Drill is another outlet to quickly reach Level 3. From there, fill out the deck with a personal suite of drills, and top it off with some powerhouse cards like Orange Uppercut, Orange Power Point, Orange Stare Down, Visiting the Past, Stare Down, Time is a Warrior’s Tool, Blinding Energy Move, and Villainous Visage. Good luck!

That’s all for this week’s letters, thanks to everyone who submitted. You can have your question or comment answered here by mailing dbz@paniniamerica.net with “MAILBAG” in the title. Please use the same address for any ruling questions. As always, I’ll wrap things up with the question of the week:

Of the currently revealed cards from Heroes and Villains, which Style do you think has improved the most?