It’s time for the Card of the Week, featuring a new MP from Heroes and Villains. Let’s take a look at Nappa. 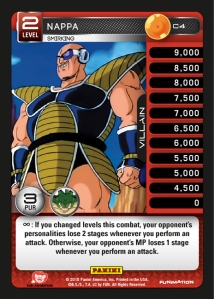 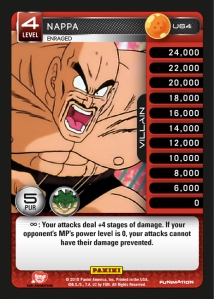 If Nappa loves one thing, it’s killing allies. Nappa level 1 gets down to his roots – straight up ally killin’. He’s also one of the few MPs to begin the game with a physical attack. When paired with Black Devious Mastery, it becomes a reliable poke for 4 stages and 1 Life Card. On Level 2, he is able to deny your opponent stages regardless of defense. Red decks using Nappa might string together a large turn whenever they drop down to Nappa – Smirking. His Power on Level 3 is a sizable attack, and the HIT effect is an additional element of board control. Finally, his Level 4 can quickly end the game with high damage attacks that ignore Endurance. Saiyan decks and their rapid anger gain are well positioned to take advantage of this Power. 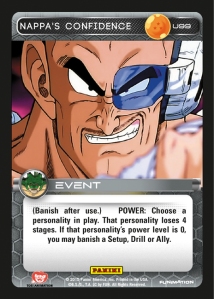 Nappa’s Energized Charge does a significant amount of damage, while also ensuring that an opponent will not be able to refresh stages by advancing a Level. It also has combo potential, such as pairing it with It’s Over 9,000! or Blue Overpowering Drill. Nappa’s Confidence gives you access to even more guaranteed stage loss, which can be devastating to decks running a high count of energy attacks. It also makes Nappa the first character to have a removal effect on a Named card, making him an ideal candidate for any Style that is lacking in that department.

Overall, Nappa is a solid mix of damage, removal, and stage denial. I hope everyone is looking forward to using him when Heroes and Villains releases in early March! Stay tuned as more previews roll out throughout the week, and don’t forget to check out the fan site reveals: