Whenever the planet is in jeopardy, Goku is always the last line of defense. In Dragon Ball Z: Evolution, he’ll do it with the help of his friends!

Blue Tag Team Mastery is a difficult card to quantify. 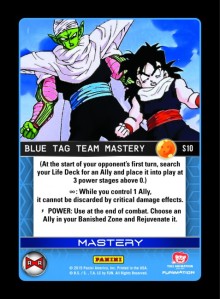 It does not generate an action during combat, and it does nothing in the way of damage amplification or defense. However, the expense of giving up an active Mastery comes with an effect that can guarantee a specific Ally will be accessible to you most of the game. At the same time, you can run a toolbox of Allies and juggle them in/out as needed. You’ll notice some interactions between old Ally bounce cards and Blue Tag Team Mastery, as well as some new synergistic effects like Blue Wash.

There are several “buddy system” pairings with the Mastery that work well together. One such example: Nappa with Vegeta as an Ally. In this instance, you’ve modified your Mastery into a somewhat consistent +2 damage modifier, but with the tradeoff of access to Blue’s card pool and the ability to juggle stage damage by redirecting to Vegeta. 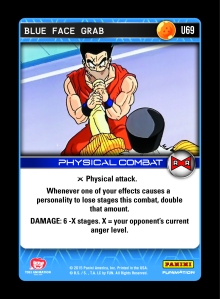 Blue Face Grab has synergy with numerous Androids, and it also shines with Nappa’s Confidence. It pairs well with:

Blue Entertaining Drill is easier to trigger with Blue Protective Mastery, but is still useful in Tag Team decks with a enough anti-anger attacks.

Even Blue Cleanse has potential applications in Nappa, especially a more combo oriented build with I’ll Dig Your Grave and It’s Over 9000 as ways to trigger Nappa’s Energized Charge. Frieza is another legacy MP that benefits from this effect, and some of the new MP’s can make use of this in slime anger variants.

Other fun combinations to consider include Android 20 with Android 19 Ally, or Gohan with Piccolo Ally. It’s exciting to think of what interesting pairings will be utilized, both now and beyond!

Aside from running the singleton Ally “buddy system,” the Mastery also enables more flexible builds with a higher Ally count.

Goku Level 1 brings a lot to the table. First, a free attack for two life cards is nothing to ignore. In any Ally deck, returning an Ally to your hand can be a useful tactic to dodge removal or turn off a symmetrical effect. In Blue Tag Team decks, Goku’s Power also ensures that you can skirt back under the Ally protection threshold. Beyond all of that, the HIT effect allows you to search out whichever Ally is appropriate for the situation (and shuffling your Life Deck can always be useful!)

Goku – Motivated has the type of damage modifier that Ally decks love to see, and his Instant Power ensures full protection of a key effect. It is worth noting you can target an opponent’s Ally as well…

On Level 3, you’ll be able to search out an Ally while dishing out a 6 Life Card attack. You’ll generally want to grab an Ally with an attack, as it has the potential to become unstoppable. 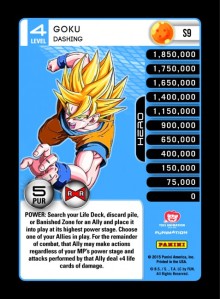 Goku – Dashing carries on the tradition of Level 4 Goku searching the Banished Zone, and his Power ensures access to any specific Ally effect you need, while also providing a huge barrier against physical beatdown decks.

“Only I may kill Kakarot!”

While Chi-Chi is certainly a strong candidate for the effect of Blue Tag Team Mastery, Vegeta provides an interesting alternative. Each turn, Goku’s Power can return Vegeta to your hand – allowing him to dive back into play and stop an attack. Vegeta can still be disrupted while in you hand, but even a minimal investment in Ally searchers can keep your combo flowing.   I hope you’ll look forward to utilizing Vegeta Ally, especially against Android 19!

Until next time, keep your eyes on the fan sites below for more previews. On Friday, the long awaited Vegeta MP stack will be revealed – along with his new Named card and Orange Adept Mastery!