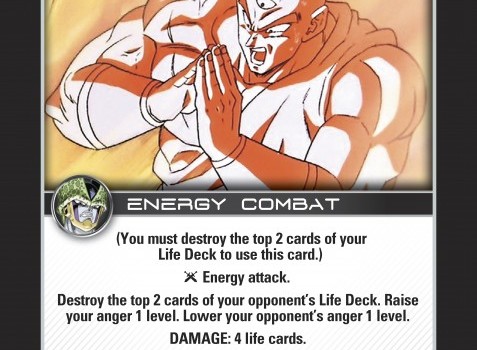 We’re back with more Perfection previews! Every Tuesday leading up to release, we’ll be showcasing four Freestyle cards on the blog. Check out the first batch below:

As the game continues to expand, you’ll see more support for legacy characters in the form of unique synergies or new Named cards.

Tenshinhan’s Tri-Beam reinforces Tien as a preeminent tempo MP.  The card art depicts an iconic moment – and its effect lives up to the hype! At the cost of self-destruction (but no stages), Tien can mill, swing anger, and potentially trap your opponent in a hole as you force them to skip. If it hits once, it’s very likely to hit again – leading to another skip! Tien is mostly utilized in suicide MPPV builds, but Tri-Beam solidifies his legitimacy in beatdown decks. In a field slanted towards Namekian, tempo king Tien would be a strong choice to stall Piccolo on Level 1.

The Named imprint on Overwhelming Power is another example of support for legacy characters like Frieza and Tien – while still maintaining positive interactions with the rest of the set’s themes. It’s also considered Styled, which opens further avenues for fishing it out. When you do search for it, you’ll get a Crit! Beyond all of that utility, the actual card effect is a powerful new tool for physical beatdown decks. This is a bomb to keep your eye on, no doubt. 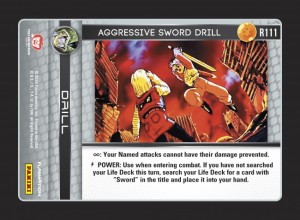 Aggressive Sword Drill enables an entirely new archetype. Characters with Named cards that have “Sword” the title will always have natural interactions with this Drill, but there are more Sword cards sprinkled throughout the set (including one for every Style). It’s easy to imagine how the Sword cardpool can expand in future. . .

Though you can’t search it out and use it on the same turn, it still has a wide range of applications with Tree of Might. Depending on the direction you take your swordplay, this Drill can even be utilized in a defensive or control build. The ability to toolbox tech targets is also welcome in any deck, while simultaneously increasing the damage efficiency of cards like Trunks’ Sword Slash and Dashing Sword Attack. 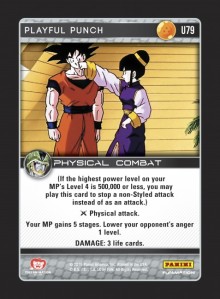 Playful Punch provides a huge boost to the underdogs. The usefulness of dual attack/block cards has been well established by tournament staples like Blue Round Throw and Black Dense Ball, and this packs in stage gain to boot. Deck slots are tight as it is, and cards like Playful Punch only add to the pool of agonizing selections and cuts!

That’s all for now, but make sure to check back on Friday for a full breakdown of Master Roshi.  Also, previews are going out to fan sites NOW – check the following links for more spoilers throughout the month: