Hi folks! Friday means we are one week closer to Perfection, and today we’ll be previewing Master Roshi:

Master Roshi – Expectant is the first MP in the game to have a Defense Power on Level 1. This allows Roshi to survive in the early game while simultaneously developing a board. However, prevention effects have numerous counter-plays, so Roshi decks that are over reliant on this Power can be exploited.   Aside from the defensive aspect, Roshi’s Power also provides innate leveling. Roshi loves training, but you’ll want to manage your Drill count carefully as you will level up against your will. Finally, Roshi has positive interactions with searching his own deck (or punishing your opponent for searching yours!). On Level 1, the constant Rejuvenation allows recursion of key Drills or Setups that were burned early.

Master Roshi – Overwhelmed expands upon the capabilities of his Level 1. First, note that the timing of his bounce effect allows you to return a Drill to your hand before it would be discarded due to leveling. The prevention Power remains, but now requires a Setup or Drill to leave the table instead of enter play. This creates numerous interactions with your own effects, but can also serve as board control when you return a card that your opponent controls. Finally, his Constant Power provides a steady stream of anger, which can be used for things like for MPPV strategies, payment of effects, sliming to Level 3 against control… 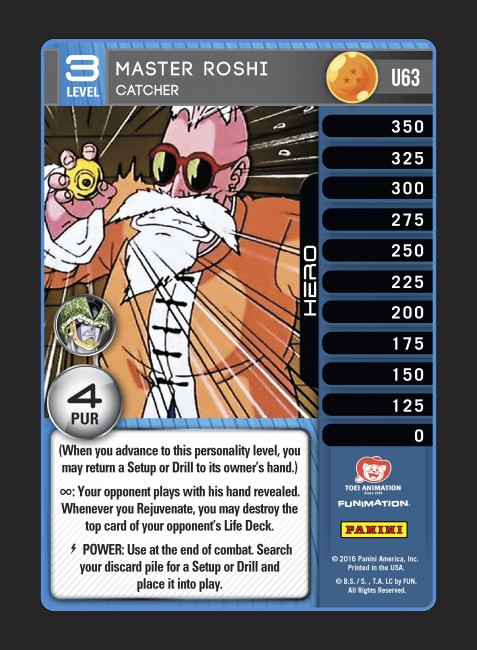 On Level 3, you’ll once again be able to protect one of your Drills after leveling, but with the added option of targeting something under your opponent’s control. Master Roshi – Catcher gives up his prevention Powers in exchange for effects that can become overwhelming against slower decks. You’ll have to mange your anger carefully, as Roshi shines on different levels depending on the matchup!

Constant knowledge of your opponent’s hand has been proven invaluable by cards like Blue Mental Drill and Ginyu Ally, while also forcing your opponent to find answers as you passively mill. As a cherry on top, Roshi can nab a Drill or Setup from his discard pile to continue dominating the board. 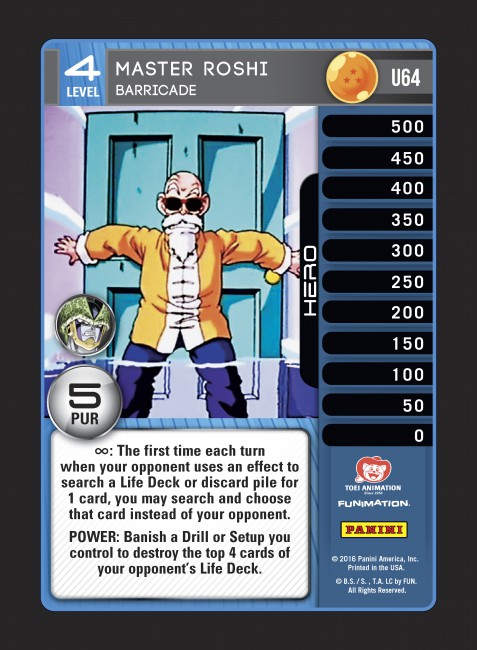 Master Roshi – Barricade packs another devastating anti-control effect, as well as some reach to finish off the game. Rather than simply turning off search effects, Roshi can choose the target himself! Playing a search card simply for its damage against Roshi will make you think twice, but sometimes it is unavoidable.

Master Roshi’s Slumber is a clear callback to the DBZ CCG, and it’s versatility is astounding. Whether it’s in your hand or in play, you can count on it providing some form of defensive relief (similar to Raditz’s Offensive Guard, using the card from your hand counts as a defense). When you’ve stabilized, Master Roshi’s Slumber can also enable stacking to anger out or set up flashy combos.

Master Roshi’s Back Strike is the strongest search effect in the game. For no cost, you’ll be able to find any card in your deck. This is especially relevant on Level 3, where it will be easy to find the perfect answer. The HIT effect is gravy, but also hurts offensive decks that favor a low block count.

And there you have it! Master Roshi has obviously applications in Setup or Drill heavy builds, but his Powers lend himself to a wide range of strategies. Please look forward to using him when Perfection launches on February 26th, and be sure to check back next Tuesday for a new batch of Freestyle previews!

You can also find a few bonus Perfection previews starting tomorrow by following @PaniniDBZ on Twitter.