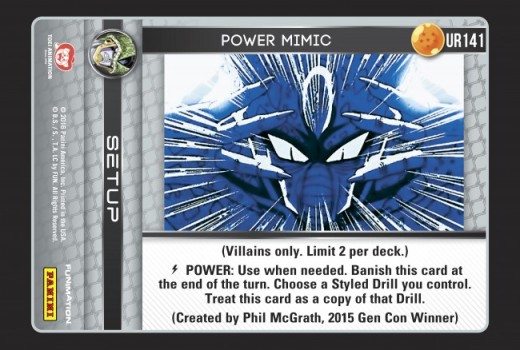 The time has come! Dragon Ball Z: Perfection drops this Friday, and you can find all the final preview information below:

The two Ultra Rare cards in Perfection are sure to make an impact on the metagame.

Power Mimic (designed by Gen-Con Champion Phil McGrath) is a “Villains Only” Setup with dazzling flexibility.

Here’s what Phil had to say about the design process of this card:

“I originally designed Power Mimic as a callback to a card from the now defunct Overpower card game. This was the inspiration for both the card effect and the title of the card, however the effect didn’t translate to this engine easily. Fortunately one of my favorite cards in all of DBZ CCG history happened to fit the theme of Power Mimic, while also providing a core effect more suited to this game.

The moment I knew I wanted to use the phrase “Power Mimic” I immediately realized what image I wanted on the card. Cell’s use of Solar Flare was an iconic moment in DBZ and this particular screen cap is perfect for the card. I couldn’t be happier with the way it turned out, especially the way the template and the foil pattern work together to make the card pop. A pleasant surprise.

I designed this card before Worlds with the intention of using it in Orange Villain decks, especially Android 20. However, the plethora of powerful Red Drill support in Perfection has lead me down the path of a Red Ruthless Android 20 deck that I can’t wait to use with Power Mimic.

Like Krillin’s Power Tap, Power Mimic is a card that rewards clever play. Its power resides not in brute strength and obvious uses, but in extreme versatility. The ability to change strategies on the fly and to pressure your opponent in multiple ways with a single card is rare and powerful. Finally, this Ultra Rare will also grow in strength as the card pool expands. New interactions will be born every set, and the way Power Mimic impacts games will change drastically over time.” 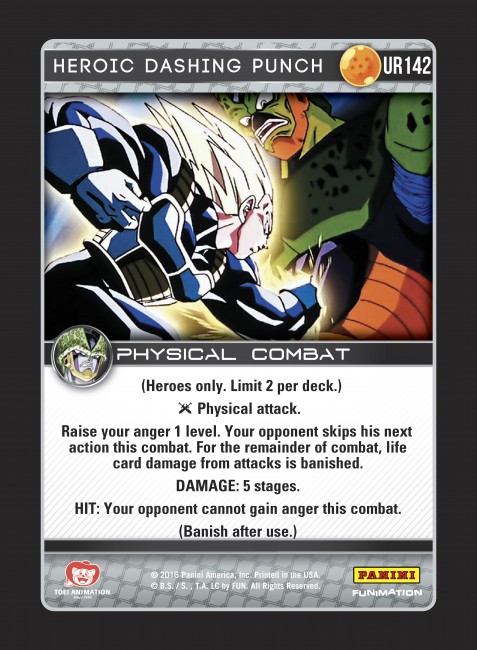 On the “Heroes Only” side of things, Heroic Dashing Punch is a vicious new tool for several types of aggressive decks. The vanilla value proposition is reasonable, starting off with five stages of damage and +1 anger. The usefulness of banishing damage has been demonstrated on the tournament circuit by cards like Crushing Beam and Frieza – Mastermind, and its symmetrical effect is more likely to harm your opponent than yourself.

Perhaps most importantly, HDP also causes your opponent to skip – leading to efficient combat sequencing (or an outright stage lock before your opponent can perform an action!). This provides a quick tempo boost, and gives the card appeal in builds beyond physical beatdown decks. Finally, the HIT effect can stun your opponent’s anger for the turn – which guarantees that they will not be able to refresh power stages through conventional leveling.

The highly anticipated Android Saga foil pattern from the DBZ CCG has finally made its triumphant return! This one will be a tough act to follow. . .

You’ll be able to get your hands on these by attending one of the many Launch Events located throughout the country! Make sure to check with your local store  for information about the format, date, and other details. You can find out more about the Launch Kit and launch formats here.

You can find a partial list of launch events below; keep in mind only some of our distributors submitted lists. If your local store is not listed here, make sure to check with them for more information and have them confirm that they are receiving a kit.  Also, if your store is hosting an at-launch even, please feel free to reply in the comments with the store information.

The wait is finally over – Perfection is upon us!