Check out the latest happenings in the DBZ TCG below, including a hint about Vengeance!

Cell Restored, Adaptive 20, and Devious Krillin are all locks to be heavily played at any tournaments in the near future, and several other builds are almost as common (i.e., Red Turles, Yamcha, Roshi…)

MPPV is natural predator against control, and any under-teched Krillin or 20 decks can easily get left in the dust by Tien. Winning by MPPV is a tall order against Cell, but bursting through levels is still a viable tactic when backed up with adequate offensive pressure. This deck is well positioned against the field and looks to be a top contender in the emerging environment. 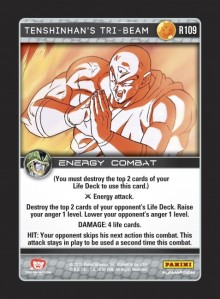 2 – Nominee for most impactful card of the moment: Master Roshi – Scouted

In the current meta, Roshi Ally dramatically changes the entire game as soon as he hits the table. Decks that are unable to naturally deal critical damage will suffer the most, as they are cut off from searching out Ally removal. In fact, Roshi Ally is so strong it makes you wonder why Tag Team for Roshi doesn’t see more play!

Cell’s presence is likely at an all time high, and many players are currently gravitating towards his early success and wide array of options. There are several ways to answer a Cell-laden field, including an emphasis on level management (of both yourself and your opponent). In the case of some MPs, the ability to function on Level 1 and ignore level-down effects can be a determining factor in your deck’s overall direction. Traditionally, this role is filled by control decks that are happy to maintain drills and play defensively. However, Blue Protective Vegeta decks are often combat oriented, and can even slant hyper-aggro. Vegeta on Level 1 is a robust option wherever Cell is lurking. . . 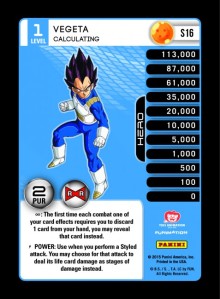 Put me in, coach.

4- Rather than announcing something fake and waiting to hear a collective eye-roll, the blog’s observation of April Fool’s Day will come in the form a spoiler. One of these statements is true: