Check out “Unleashed” from Vengeance!

1. Update on the competitive scene

Over thirty tournaments took place last weekend, and the Perfection meta continues to develop new folds. Cell Restored has firmly established itself as the most prevalent deck in the environment, while new permutations of Black Krillin cling to relevance. Knowledge Piccolo has made a resurgence as an alternative to Cell, showing up in large numbers and taking the top spot in a handful of events. Adaptive Yamcha was also highly represented, along with the standard Adapative 20. Additionally, Enraged and Devious Roshi made an impact, followed by various builds of Ginyu. Though the full results are still pending, here’s a visual representation of recent top cut decks: 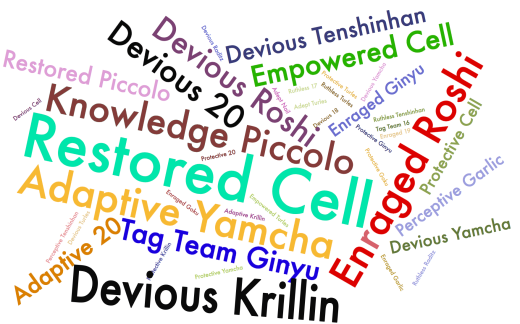 Cell is more likely to be seen in Namekian, Saiyan, or Black – but Blue has proven itself as a strong counter in Cell mirror matchups. Blue Protective Mastery can pester Cell’s Draining Attack, and even after leveling up the opponent must still navigate through effects like Blue Takedown and Blue Neck Beam. Management of Cell’s Level 3 Power is often the primary conflict in Cell vs. Cell matches,  and the Mastery provides extra insurance against the unpreventable 7 life card attack. To go one step further, Blue Swift Block against Cell’s Level 3 can be particularly devastating!

Vengeance previews begin in just two weeks, with Broly leading the way. Aside from MP breakdowns on the blog, you’ll also be able to find spoilers on various fansites and podcasts. Below, you can see the art for UR142 – Unleashed! Unleashed has the ability to search your Life Deck for a card that attaches to your MP, which has obvious applications with certain Styles. It also combos well with [REDACTED], a new “Heroes Only” freestyle attack that punishes cards like Time is a Warrior’s Tool and Namekian Hybrid Defense. 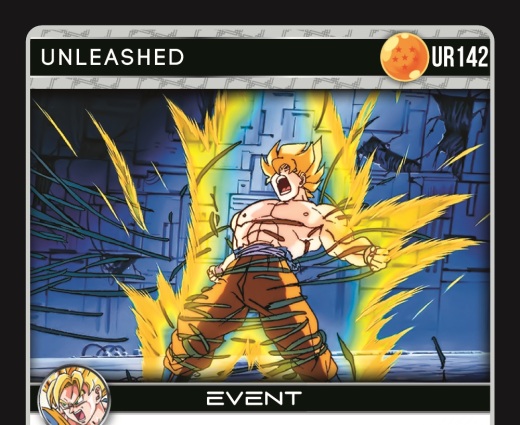