Gen Con reminders, photos from San Diego, and a chance to win Beerus – find out more below!

The next event on the Organized Play schedule takes place in Indiana on August 6th at Gen Con! Space is limited, but there is still time to pre-register here. Gen Con will surely set the second wave of Vengeance’s metagame in motion, and the champion will earn the right to create a card for future release – joining the likes of World Champion Tim Batow and 2015 Gen Con Champion Phil McGrath!

Already a secret MVP in rogue Devious 20 builds, Hidden Power Drill has some enticing new avenues for abuse. In a Saiyan deck running Unleashed, you can quickly reach Goku- Super Saiyan (Level 4) and repeatedly slam Hidden Power Drill onto the board. Trunks – Protective is another toy from Vengeance that enhances HPD, and the splash damage against Allies (Gohan, Android 13) is noteworthy. 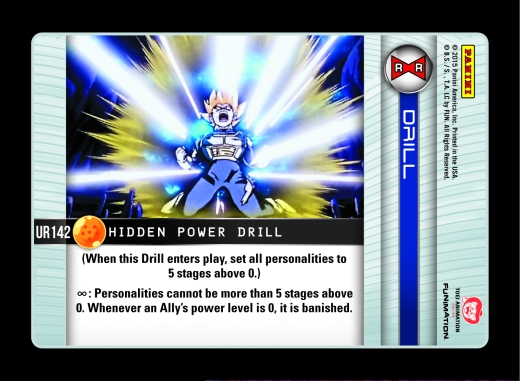 Hidden Power Drill is primarily utilized by aggressive stage beatdown decks, but it has applications in nearly every archetype. Stage management has always been a vital skill in top level play, and the current metagame places even more of an emphasis on power stages. Hidden Power Drill warps the value of stages in a way that your opponent may not be prepared for, while also packing the potential to cause stage loss for your opponent or stage gain for yourself.

If you are unable to make it out to San Diego this weekend, fret not – we’re giving out five copies right here on the blog! Reply in the comments section with your favorite dessert (one   entry per person), and your name will be entered to win a Beerus promo card from Comic Con. Please make sure your WordPress account has an accurate e-mail address for contact purposes.

The winners will be announced next week – good luck!