Check below for previews of the Red Lanterns!

The December 22nd release date for Green Lantern is rapidly approaching – let’s continue our tour through the emotional spectrum with a look at the Red Lantern Corps! 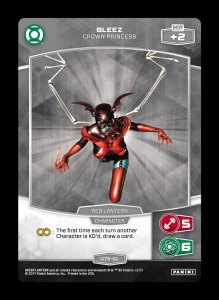 Red Lantern based decks can be extremely aggressive, and this card shines when things get tough. Bleez – Crown Princess brings solid stats and middling MP generation, and her Constant ability thrives on the chaos of combat. Drawing an extra card on each player’s turn is consistently achievable with this effect!

Guy Gardner – Sector 2814 keeps up the pressure by recruiting more attackers directly into play! Aside from targeting the likes of Bleez and Dex-Starr, this speedy effect also interacts with the Red Lantern’s true powerhouse:

Atrocitus – Atros packs one of the largest Stat distributions in the game, granting access to 18 different Battle Cards! Atrocitus fuels your rushdown further by drawing 2 additional cards, and the downside of KOing a Character can often be timed to your advantage. At the very least, Atrocitus can be played on an empty board as a pseudo-Event that gains cards and MP.

The stamped Events for Red Lanterns complement their lust for battle, though not sheerly through mindless aggression.

Blood and Rage stops your opponent from attacking for a turn – which can protect from counterattacks after you’ve pushed all of your Characters into the Battle Zone! Keep an eye out for Burn You All, which Red Lantern decks can utilize to KO a Character for relatively low cost.

Today’s final card showcases one of the most powerful tools available to Red Lanterns! This 7 Strength Battle Card can be used by any Red Lantern for 0 MP, creating agonizing scenarios for your opponent. Your opponent can defend and almost assuredly lose a Character (perhaps triggering Bleez!), or allow the attack through as you blitz closer to 7 VPs!

Check back on Tuesday for more from Green Lantern, and look for additional spoilers on the following sites:

One thought on “GL Spoilers: Blood and Rage!”