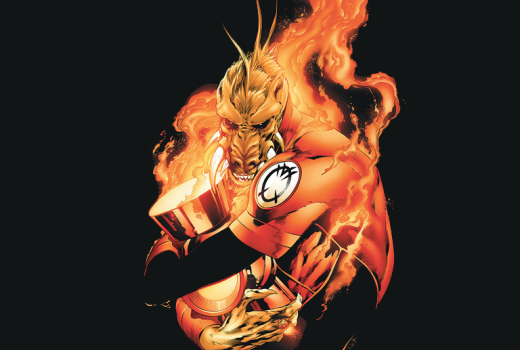 See below for info about the final faction of the set – the Orange Lantern Corps!

Today’s batch of previews showcases the Orange Lanterns – with a heavy dose of Larfleeze! 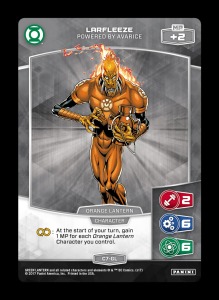 Larfleeze – Powered by Avarice is one of the more universal Orange Lantern effects, as he still gains +1 MP per turn in a deck with no other Orange Lantern Characters. In this role, he can operate as a slower (but more robust) version of Poison Ivy. In builds focused around the tribe, this effect provides consistent fuel for the higher costed Orange Lantern stamped Events. 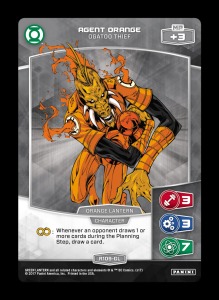 Agent Orange is one of the few triple-Stat Characters with a maximum Rank of 7, and he also generates an impressive +3 MP! Whenever he’s on the board, Ogatoo Thief’s effect will make your opponent think twice about drawing extra cards. More importantly, this also enables combos with any effects that allow both players to draw a card. Previously released cards like Hawkman have new applications with this effect, as well as some of the cards below! 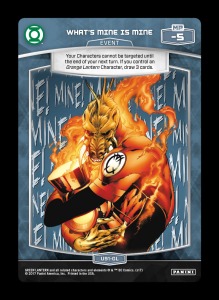 What’s Mine is Mine protects your Constant effect engines from removal, and then draws 3 cards for -5 MP (comparing favorably to the standard Upper Hand). Orange Lantern decks have a significant amount of card advantage – but they are also susceptible to running out of cards! 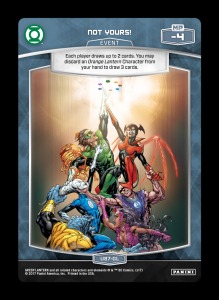 “Not Yours!” allows each player to draw up to 2 cards for -4 MP, netting you +1 card in your hand (with +2 for your opponent). If you discard an Orange Lantern, your net total of cards gained becomes +3 (moving you ahead of the +2 gained for your opponent). If Agent Orange is in play, you’ll then draw yet another card – culminating in an overall advantage of +2 cards (4 cards drawn to your opponent’s 2) while seeing six cards deeper into your deck. Whew! 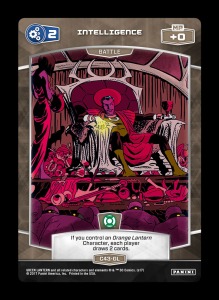 This zero-cost 2 Intelligence Battle Card also has combo power with Agent Orange, and it provides another example of the Orange Lantern archetype’s ability to maintain its hand size while inherently pressuring Control decks.

While this brings us to the end of faction rundowns from Green Lantern, be sure to check back on Tuesday for more news and coverage! Until then, you can still find more spoilers here:

One thought on “GL Previews: What’s Mine is Mine…”