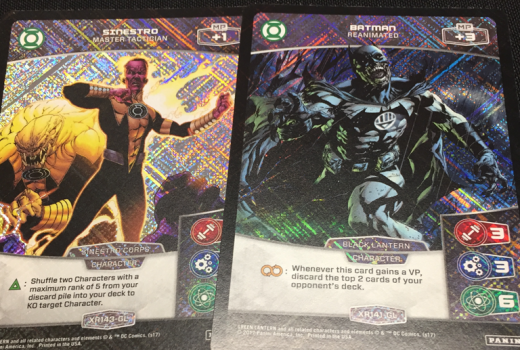 Check below for more previews from Green Lantern, along with a look at the set’s foil pattern!

The December 22nd release of Green Lantern looms ever closer, and today we’ll take a look at some of the final previews of the set. Watch for a full Checklist of Green Lantern scans in the coming weeks!

This effect provides another filtering option for low rank Intelligence BCs, and its ability to draw the bottom card of your deck can enable some unique combos.

For decks focused on the Sinestro Corps, this offensive 5 Intelligence BC adds another layer of hand disruption. In a specific scenario, this effect often delays the use of a key Event for Mongul to later discard.

Endless Brawl is useful in a variety of archetypes, as its unique (and cheap) effect can lead to intriguing scenarios. While certain Aggro builds benefit from this effect discouraging defenders, you’ll also want to consider Characters/decks that benefit from self-KO. 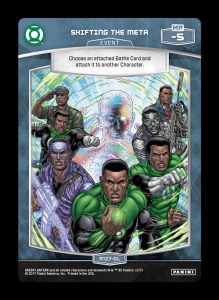 Shifting the Meta is reminiscent of the new White Lantern Superman, but with a more universal application. Events that cost -5 MP usually have a “flashier” effect, but this card can generate both tempo and card advantage by healing one of your own Characters while KOing an opposing one.

Like every other card in the set, Shifting the Meta can also come as a premium foil card!

In general, you can expect sets from the same universe (such as “DC Comics”) to share the same foil pattern. Watch for a new pattern in the future with Attack on Titan!

That brings us to the end of our previews from Green Lantern, but check back on Friday for more news – including an update on the forthcoming tutorial video! Until then, you can still find additional Green Lantern spoilers and coverage here: