See below for a look at more spoilers from Attack on Titan – plus photos from GAMA!

This past week, the GAMA Trade Show took place in Reno, Nevada. Panini Games exhibited at the event, and cards from the upcoming Attack on Titan set were on display in the form of Demo Decks!

Attack on Titan Demo Deck boxes include a quick play rules sheet and two small decks for freeform gameplay – watch for a breakdown on its contents as we approach release!

The full booth on display 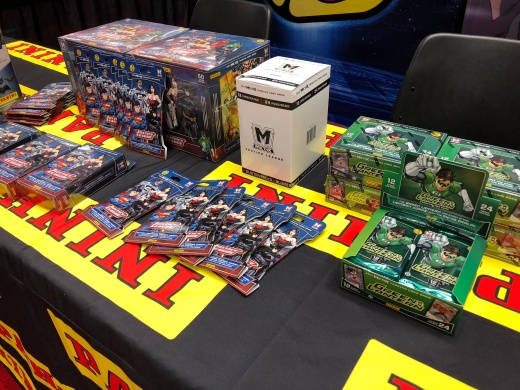 As a Character with only one Stat, Rico is KO’d by any Battle Card hit. However, this is a card that shines outside of combat – in both stamped and rainbow builds! Since the effect allows you to target Rico herself, she can act as a recurring MP engine (similar to Shazam, but without the combat efficiency). In a deck with other Garrison Regiment Characters, this effect ensures your board will never be clogged – while also healing off any attached damage!

Hannes – Family Friend has a smooth Stat distribution for a Rank 5 Character, though his MP gain is below average. Hannes’ Push effect allows for Garrison Regiment builds to quickly fill the board with Characters – while still netting a card on turns where you only play a single Character.

Dhalis Zachary creates significant card advantage and inevitability – especially when paired with the effect of Rico!

This effect compares favorably to something like Green Lantern – Hal Jordan, as both pose threats as efficient (yet slow) card advantage engines. Although it is more difficult to arrange the bottom of your deck than the top, lists with Pyxis are rewarded with access to several unique combo interactions. 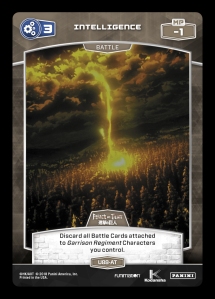 The Garrison Regiment has the most troops of any unit, and this is reflected in their ability to consistently maintain a field full of Characters. Aside from their potent recursion, you’ll also be able to heal them up with this 3 Intelligence Battle Card! Since this works both offensively and defensively, this card can followup clever defending to generate card advantage – or be used on the attack to keep up tempo!

Find more cards that interact with the Garrison Regiment (and other AoT spoilers) at the links below, and check back next Tuesday for a look at the Cadet Corps. Leading up to the March 30th release, also watch for a breakdown of the two player Starter Deck Set, shots of the foil pattern, giveaway contests, and more!

One thought on “AoT Previews: Watchers on the Wall”