See below for the latest previews from MetaX’s Attack on Titan.

The Cadet Corps is made up of hopeful trainees, and their effects emphasize “techy” abilities that can be utilized by a variety of decks (including a specific synergy with the Scout Regiment).

This is the most universal effect out of all the Cadet Corps Characters, and it has obvious applications with Scout Regiment cards like Flanking. In Potpourri builds, Mikasa can enable more consistent combos (with things like the recently revealed Research) – and her interactions will expand exponentially with each release!

Unlike the previously revealed Scout Regiment Eren, this Cadet Corps variant packs a maximum rank of 7. While not as generally robust as his Mysterious Titan form, he provides good general value with a triple Stat alignment and above average MP generation. Meanwhile, his effect can answer numerous discard pile oriented cards (such as Starfire and Joke’s On You).

As long as you keep attacking or using Push effects, Conny Springer – Outgoing Cadet can protect your Characters from cards like Firestorm or Knockout. In practice, this allows for access to a shielding effect in both aggro and combo/control builds. 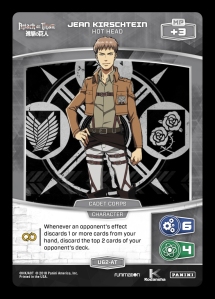 This card can provide a floodgate against hand destruction effects, as your opponent will generally want to remove Jean before causing any discards.

With several situationally relevant effects, Devastation allows you to find the appropriate Cadet for a given situation. Though this is only accessible to certain Scout Regiment lineups, note that it plays the Character directly (allowing for an extra Character drop in quick swarm builds).

Watch for other Cadet Corps cards (including an Event that searches for a Battle Card) and additional spoilers at the fansites below. Check back on Friday for more previews from Attack on Titan, as well as a look at the set’s new foil pattern!