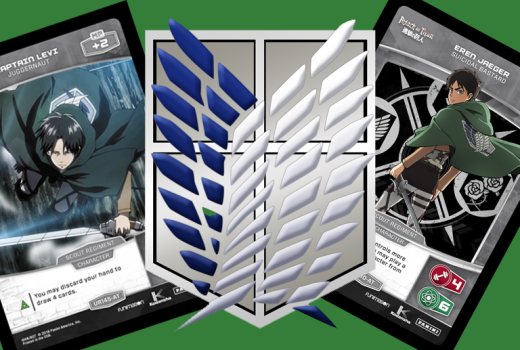 What can the hope of mankind bring to MetaX?

Much like the series, Scouts in MetaX rely on one another to swarm the battlefield and attack in unison. Scout Regiment cores start with two distinct frameworks, usually forking from “pure Team Attacking” or “general beatdown” – each of which with countless permutations to explore. 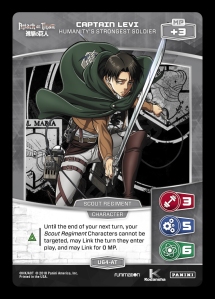 Captain Levi – Humanity’s Strongest Soldier leads the charge for Team Attack builds, shielding all of your Scout Regiment Characters – while enabling fast and cheap Links! Proper timing (and reuse) of this ability can indefinitely delay cards like the Titan’s Brutality. His triple Stat grid allows him to Link to any Team Attack, and his +3 MP adds even more value to this loaded card.

In Scout Regiment builds, Oruo Bozad compares favorably to Nightwing – without the drawback of being exposed to defenders! Even if your opponent blocks everything, this teammate can quickly end the game if left unanswered. 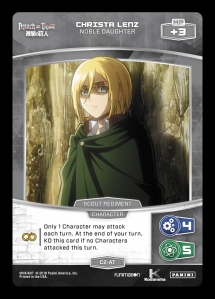 Christa Lenz is another dynamic tool for Team Attack builds, as she restricts each player to making a single attack each turn (note that “Linking” is not attacking and thus is not affected by this restriction). This means that you can make a Team Attack (and reap the benefits of an effect like Oruo Bozad) while being assured that your remaining prepped Character will be able to defend the opponent’s sole attacker on the next turn. Though her self-KO clause prohibits this card from being abused in control decks, this unstamped effect can still enable a variety of creative builds. 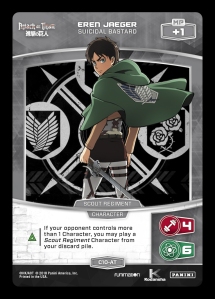 Eren Jaeger – Suicidal Bastard is a powerful card in any type of Scout Regiment deck. In Team Attack builds, you’ll be able to recur key Constant effects and build up bodies for Linking. In general use, he can generate massive value simply by targeting a “when played” Character – not to mention chaining some high MP gains! 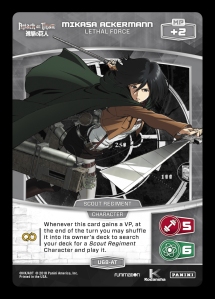 Mikasa’s knack for quickly maneuvering around the battlefield is reflected here in her ability to pop in and out of play! Any time she gains a VP, at the end of the turn she’ll return to your deck and fish out a Scout Regiment Character to play. This effectively neutralizes any damage that was attached to her, while also finding the perfect effect for a given situation (and gaining a bit of MP).

Captain Levi – Juggernaut offers a flashy draw engine, and there are numerous ways to make use of his effect. As a tech option in Scout Regiment builds, he might filter away a medium sized hand to net +1 or +2 cards (while seeing four new ones). In other Scout/Cadet decks or general Potpourri builds, his ability can be utilized as an outlet to quickly fill the discard pile for various recursive effects. In aggro decks that aim to empty their own hand, he can generate massive card advantage – allowing you to keep up the pressure with constant attacks!

For -3 MP, you’ll be able to exchange a Scout from play for a Constant teammate from your deck or discard pile. The Character you search for will gain MP when played, so this effect can often pay for itself. While you’re more likely to see this Event in Team Attack builds, it still provides some tech options with other Constant Characters (such as Armin). 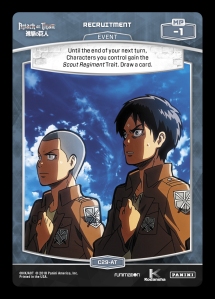 Recruitment allows any splashed Characters to benefit from your stamped effects, and it can smooth over a dual Scout/Cadet Corp lineup. This card also makes a big impact in draft/sealed formats – be on the lookout during launch weekend events! 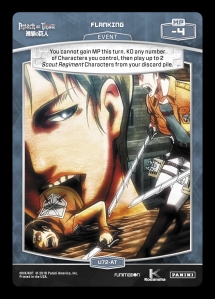 This is another card that functions well in all Scout Regiment builds, regardless of archetype. Aside from clearing potentially clogged Characters, Flanking then grabs any two Scouts from your discard pile! This not only creates raw Character advantage on the board, but also offers significant utility – such as imitating Transfer of Power by KOing and replaying a “when played” character. 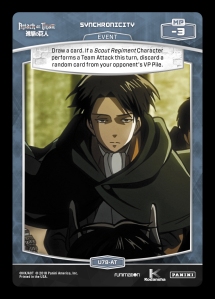 Team Attack builds can often suffer from counter attacks gaining VPs, as Pushing your Characters to Link leaves them unable to defend. Aside from a smattering of effects that allow Team Attackers to Prep, you can also address this defensive dilemma by healing a VP with Synchronicity.

This Multi-Stat 6 is another strong tool for the Team Attack build, granting two free turns of Linking. Meanwhile, the 2 Special can clear out an opposing Character before it has a chance to defend – but its low rank means your Team Attack is susceptible to being repelled! Watch for other effects in the set that interact with Team Attacking, many of them with legacy applications (as they are not tied to any specific Trait).

You can find additional Scout Regiment cards (plus other spoilers) at the fansites below, and check back on Tuesday for a look at the Military Police. As we approach AoT’s launch at the end of the month, watch for news from GAMA, a look at the two player Starter Deck set, a breakdown of the Launch Kit contents (including MetaX play-mats), and more!

2 thoughts on “AoT Previews: On Wings of Freedom”