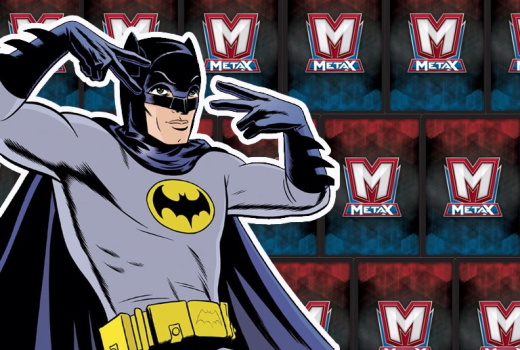 Previews for the next set will be here soon – get a taste below.

MetaX’s fourth release, Batman, will be available for sale on June 29th. Spoiler season officially begins on May 25th, starting with the Ultra Rare card Batman – Prepared on the Panini Games Facebook page. From there, you’ll be able to find additional previews across various fansites – as well as full breakdowns of each Trait on the blog! There are four new Traits in the next set:

Bat Family effects have a distinct “detective” theme, often revealing or rearranging cards from the top of either player’s deck. This investigative work allows you to make extra informed decisions, creating virtual card advantage. Watch for other effects that specifically interact with stacking the top of you or your opponent’s deck, as well as some stamped cards that can really fill your hand up!

These psychotic prisoners have uncharacteristically powerful effects – but they are conditional. Many Arkham effects require you to have 3 or fewer cards in your hand, or at least fewer cards in your hand than your opponent. To achieve this goal, look for effects that can quickly play more cards from your hand (or things that require discarding cards as a cost) – along with overlapping discard pile synergy.

There are only four members of the Gotham City Police Department in the set, but their swarming tactics are able to keep the board filled with Characters at all times. The GCPD Trait introduces a variety of novel Rank 4 Characters, and they consistently recruit each other in and out of the deck. They are rounded out with (heavily stamped) disruptive effects and a powerhouse 4 STR/INT/SP Battle Card, plus some potential interaction with Batman himself!