See below for Batman teasers, thoughts on Mikasa Ackermann – Stoic, and more!

Spoiler season for Batman begins on May 25th, and you can look forward to exciting new effects like:

Batman is scheduled for a June 29th release.

2. Card of the Moment – Mikasa Stoic

Mikasa is the tip of the spear for a strategy that revolves around the discard pile, which can be augmented with Exhaustion (or self-mill) and culminates in effects like Cunning Plot. 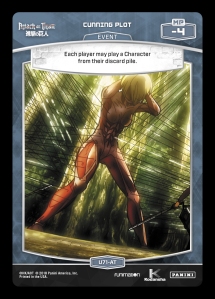 Cunning Plot on a Character like Eren Jaeger – Suicidal Bastard, Ra’s Al Ghul – The Demon’s Head, or Wonder Woman – Ambassador of Peace can allow you to max out the Character Zone in a single turn – and it has no downside when played against an opponent with a full board of their own.   Aside from finding Characters to recur from the discard pile, Mikasa also has the ability to search for Battle Cards that benefit from effects like Starfire and Joke’s On You.

Mikasa can also be utilized in combo decks with Research for fast access to key Events, and she greases the consistency of effects like 4 Special (R132-AT). The applications of this card will increase exponentially with each new release – be on the lookout some positive interactions with Arkham Inmates next set.

If you’re attending Gen Con this August, watch for a presence from Panini Games! Aside from an exhibition booth (with promos and other TBA details), stay tuned for future announcements about events taking place at Gen Con.

On Tuesday, our next Deck Tech session will investigate one of the many permutations of Team Attack Scouts. If you’d like tips for your deck (or simply want to see it featured on the blog), submit your list to OP@paniniamerica.net with “DECK TECH” in the subject line. Until then, check back on Friday for more news and notes – including additional themes from Batman!