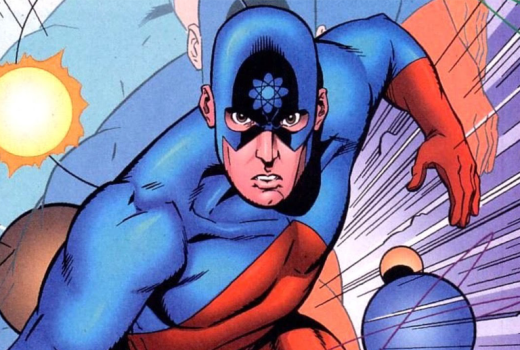 See below for a new Deck Tech featuring Atom!

At first glance, Atom – Ray Palmer appears to be a counter to Rank 7 Characters (and unlikely to be included in a deck that has its own Rank 7s). However, Atom’s Constant ability can actually serve as an engine that returns your own Characters to your hand – which clears off any Damage and allows for a replay of +MP/“when played” effects! Today’s submission from Russ P. tackles this strategy with a plethora of Rank 7 Characters:

There are risks/rewards for any devotion to a specific Rank, Trait, or theme, but this deck is able to minimize its exposure to anti-Rank 7 effects. In exchange for being vulnerable to cards like Mr. Freeze – Victor Fries and Finisher, Atom provides the upside of repeatedly dropping the same Rank 7 Character each turn. Aside from baking in a natural advantage against other decks with a high count of Rank 7 Characters, this means that effects like Darkseid – Ruler of Apokolips or Batman – Caped Crusader can be looped multiple times to deplete the opponent’s options entirely.

This can slowly grind towards victory, but there are defensive downsides. Atom is KO’d by any Damage and cannot be sent out to block, while you’re also returning one of your own Characters to your hand each turn. However, removing the Constant effect Rank 7 Characters Ra’s/Harley (which may suffer from Atom’s mandatory effect) would allow for a Dynamic Duo package to increase board presence. Other cards to consider: