The circuit series kicks off soon, followed by conventions in the summer – find out more below!

Next week’s Deck Tech will investigate another Top Cut list from the MXOLT III, and the beginning of May kicks off a new giveaway. The first tournaments for the upcoming circuit series are eligible to begin next month, with “Season 1” lasting from May to June. In July, Panini Games will have a presence at the San Diego Comic Con – and keep your eyes on the blog for information about Gen Con in August. 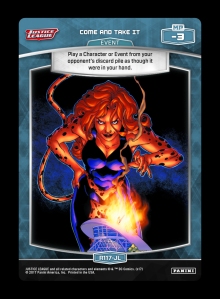 Seen in a recent Deck Tech list, this flexible Event has had a steady rise in popularity since its release in the first set. The ability to add a second Character drop for the turn is welcome in almost any deck, but builds with low rank Battle Card lineups (or an emphasis on Team Attacking) can eke out extra mileage from this effect. While many decks have heavily stamped Events or run a small amount of Events, the additional upside of playing an Event from the opponent’s discard pile is undeniable (with common targets like Joke’s On You, Power Players, and so on). This card’s versatility is limited only by the strength of the opponent’s deck – and its relevance can be accelerated by mill effects.

The first season of the MMCCC is coming soon! Players can register for an ID here, while stores and tournament organizers can find kit details here. In May, watch for details about the first wave of events – including dates, locations, tournament coverage, and more!

Unsurprisingly, there are five H.I.V.E. Five Character cards in the next set – here are three of their effects: