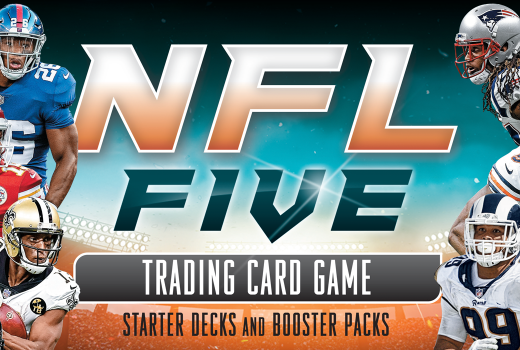 Find out about the next release from Panini Games below.

The NFL Five TCG allows you to construct your own fantasy dream team and compete against other decks – fusing a traditional TCG gameplay experience with Panini’s iconic NFL trading cards! Aside from fielding your favorite Players, you’ll also call Plays by placing them facedown (along with your opponent choosing a defense). Successful plays will gain yardage (tracked on the football field play-mat!), which can then be modified by Player abilities and Action cards. Plays also take time off the clock, which can be managed with timeouts. After two halves of play, the highest score wins the game!

Available in Booster Packs and Starter Decks in hobby stores this month. 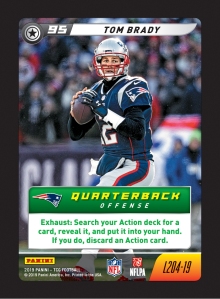 There are 9 cards in each Booster Pack, and 24 packs in a Booster Box. Cards found in Booster Packs range from Common, Uncommon, Rare, Epic, and Legendary – along with special Rookie cards. On average, you can expect to find 6 parallel foils, 4 Epics, 1 Legendary, and 1 Rookie card per box. 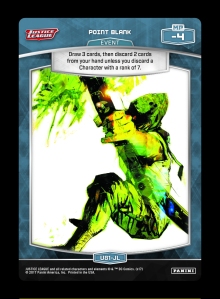 As seen in this week’s Gen Con Deck Tech, Point Blank remains a flexible card advantage Event in decks with Rank 7 Characters. Aside from the potential to net +1 card, it also allows you to intentionally place cards in your discard pile – leading to favorable interactions with cards like The Darkness Grows, Starfire, and Cunning Plot.

On Tuesday, check back for the next Gen Con Deck Tech for MetaX – and watch in the near future for the NFL Five checklist, Demo Deck, Rule Book, and more!

One thought on “Four for Friday: Announcing NFL Five!”