See this month’s MetaX giveaway below.

Tuesday’s COTW highlighted Atom – Sector 2814, a Character with the ability to use the “when played” effect of an opposing unit. This month’s MetaX giveaway asks:

What is your favorite “when played” effect in MetaX?

Post your answer on the Panini Games Facebook page, and you’ll be in the running to win a Booster Box of Green Lantern, Attack on Titan, or Batman! The three randomly selected winners will be announced on February 14th – be sure to submit your entry before the Friday cutoff. 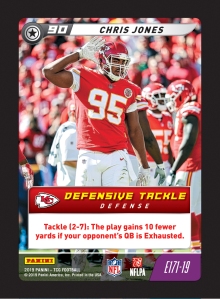 The NFL offseason is underway, and Kansas City’s Chris Jones is likely to be a top target in free agency. For gameplay purposes, E171-19 Chris Jones offers a consistently applicable effect – though his ability does require some planning to activate. In order to add an element of control to this card, look to pair him with defensive Exhaust effects like Everson Griffen.

3. NFL Five Around the Web

Watch for a new Rules FAQ next week, along with COTW on Tuesday. Aside from Friday’s MetaX winners, you can also expect more teasers about the next release for NFL Five – plus a look at upcoming promos from GAMA!