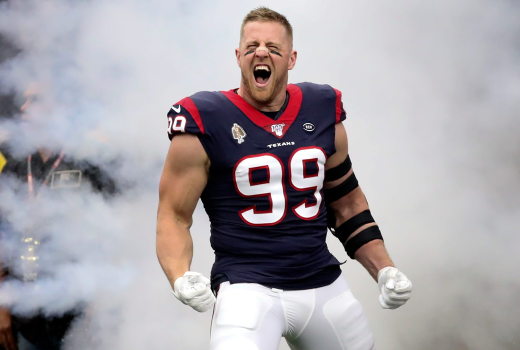 See what’s coming in May.

This month will bring two new giveaways, starting with a MetaX contest next Friday, May 8th. In order to win a Booster Box of Attack on Titan, you’ll have to examine some of the fringe Character cards from the set! Check back next week for participation details, then visit the Panini Games Facebook page to enter. Later in the month, also watch for a new NFL Five giveaway – focusing on defense! 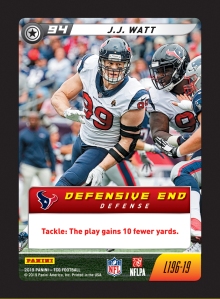 Speaking of defense, J.J. Watt is currently one of the most flexible and high value effects in the game. Though other Players like Aaron Donald and Harrison Smith can cause a greater loss of yards, L196-19 J.J. Watt can be used against both Runs and Passes. Look to activate this ability as soon as possible, since your opponent can counter Watt with an Exhaust effect.

“Is there a limit to specific Play cards I can have in my Play Deck? The rulebook only mentions 1x for “Unique” plays.”

You can run any amount of regular Play cards in your Play Deck, including 20 of the same type. Unique Plays will be revealed in the next set, and your Play Deck may only contain 1 Unique Play in total.

Though Organized Play announcements (regarding dates, locations, and prizes) are currently on hold due to COVID-19, you can still expect two new Tournament Documents in the near future. An updated Panini Games Tournament Guide and initial NFL Five CRD are coming soon – submit any FAQs to OP@PaniniAmerica.net.

Aside from Friday’s AoT giveaway and COTW spotlights, next week will also unveil more teasers from NFL Five – including hints at some of the set’s Legendary abilities! Keep in mind that shipping will remain suspended until the resumption of normal office hours – expect a status update in two weeks. Finally, keep your eyes peeled for a potential webcam tournament – hop on the official NFL Five Discord channel to learn more!