See this month’s contest winners below – and new previews!

This month’s NFL Five Playbook giveaway was announced on Friday,  providing one final chance to win a Booster Box of NFL Five 2019 before the next expansion’s release. Participants were asked to visit the Panini Games Facebook page and divulge information about their Playbook:

Do you prefer to use mostly runs, mostly passes, or a mix of both?

For the time being, it seems that most players look to pack a balanced mix of runs and passes. Amongst the respondents that preferred to emphasize a single type of play, passes were the runaway favorite. The addition of Unique Plays in the next set is sure to impact Playbook ratios – we’ll have to revisit this topic in the future! The three randomly selected winners:

Thanks to everyone that participated this time around, and check back next month for our launch giveaway – with multiple Booster Boxes of NFL Five 2020 up for grabs!

When the next set debuts on August 21st, the upcoming crop of Rookie cards will offer a variety of enticing abilities for your lineup: 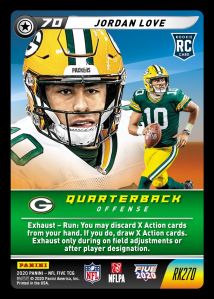 Jordan Love serves as another Quarterback to utilize with run oriented strategies.

Darrynton Evans is a worthwhile consideration for any passing deck in need of a RB.

Laviska Shenault Jr. is a Wide Receiver that can neutralize any tackler’s ability – but note that his effect only works on Runs!