In this article we’ll discuss the newly posted CRD, learn more about the upcoming tournament schedule, and look ahead to plans for a new Q & A series. 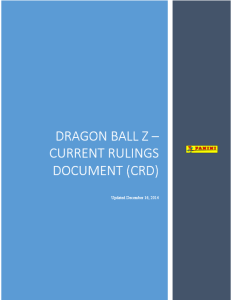 The Current Rulings Document (“CRD”) is now available, and can be found here. It will also be hosted on dbztcg.com, which is nearing completion. The CRD is the definitive source for all DBZ TCG tournament rulings, and it will be updated regularly. While the primary purpose of the CRD is to address advanced rulings scenarios, it also may contain clarifications or updates to card text.

Since the release of the game, we have closely monitored the balance of the current environment. Similarly, we have given careful consideration to fan feedback and the insight of tournament players. The decision to change a card is never made lightly, and there will always be a great deal of time and thought put into any potential re-balancing. As always, we will strive to make adjustments in the interest of promoting a balanced game that is filled with meaningful choices and emergent strategies.

“Whenever your effects Rejuvenate or shuffle cards into your Life Deck during combat, raise your anger 1 level. Whenever a Dragon Ball enters play, your opponent destroys the top card of his Life Deck. While you control 1 Dragon Ball, it cannot be captured by a critical damage effect.”

This change goes into effect immediately, as noted in the December 16th edition of the CRD. The Namekian Knowledge Mastery allowed for a passive MPPV strategy, and ultimately served to create a less interactive and competitive landscape. The DBZ TCG will always have room for various styles of deck building, but not at the expense of limiting tactical decisions. The revision serves to decrease Namekian’s ability to gain anger outside of combat, while still allowing its cards to maintain their intended function. Furthermore, Namekian will remain under intense scrutiny as development on the next expansion set progresses.

Though concrete details are still being ironed out, please look forward to a broad expansion of Organized Play in 2015. The upcoming tournament season is planned to include regional level events, as well as large scale competitions hosted by Panini America. Are you eager to prove that Namekian is still a top deck? Do you have an innovative creation to pilot in the newly formed metagame? Prove it in Organized Play in 2015.

The demand for new content and community interaction has been heard, and it will be met with unprecedented levels of support. First, the official Tournament Guide will be posted near the end of the year, and it contains a detailed breakdown of proper tournament procedures. Next, I can tell you on a personal level that your opinion matters. Moving forward, a new article series titled “Z Warrior Mailbag” will address the questions, comments, and concerns of our passionate base of players. Did you pull off a unique combo to eke out a close victory? Do you have a deck concept that needs tweaking, or a perfected list to show off in the spotlight? Send any submissions to dbz@paniniamerica.net with “MAILBAG” in the title, and your message may be featured on the blog. Tournament reports, strategy discussion, and any other DBZ TCG related issues are all fair game. To wrap things up, I’ll leave you with this question of the week:

“How do you feel about the changes to Namekian Knowledge Mastery?”

I look forward to hearing from you, and I hope you’re excited about the future of the game!