The end of the week is here – check below for the latest info about MetaX!

Starting next week, stores will be able to sign up for regular Tournament Kits (and the Welcome Kits will rotate out). In order to enter the recurring system, please direct all Tournament Kit requests to op@paniniamerica.net.

The next Tournament Kit will include new foil promos, with P1-JL 1 STR/INT/SP as the entry promo and P5-JL Batman – Dark Knight as the top performer card.

As players continue to feel out the new MetaX engine and early Justice League metagame, nearly every Character has made a positive impact in one or more decks. When evaluating a Character, they can be grouped into several different labels. For example, Characters with “Push” effects vs. “When Played” vs. “Constant.” Characters can also be sorted by the types of Stats they have access to, such as the current differentiation between decks with access to low Rank Intelligence Battle Cards and those without. 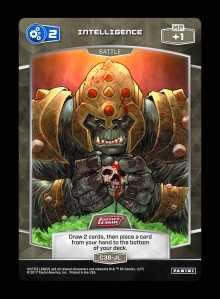 A popular inclusion in the early meta!

One of the “big picture” ways to group Characters is simply by their highest Rank. A deck with a high count of Rank 5 Characters is likely to be more aggressive, and you can anticipate access to cards like Against the Current, Overboard, Darkseid – Uxas, and Ra’s Al Ghul. Meanwhile, a deck with multiple Rank 7 Characters is likely to skew more Midrange (through larger Battle Cards generating virtual card advantage on the board) or Control. A deck comprised of mostly Rank 6 Characters is not necessarily Midrange, but definitely falls somewhere inbetween the Rank 5 and 7 builds – with its main advantage being that it can run its own Rank 7 hate (and/or dodge it themselves)!

Rank 5 decks can often swarm the board.

Rank 7 Characters are big on value – can you pull off the legendary “4 for 1” with this?!

When spending time on MetaX during this holiday weekend, allow your mix of Character Ranks to inform the direction of your next deck – while also taking into account how you might match up against other Rank 5, 6, or 7 lineups!