See below for a details about the Attack on Titan Launch Kit, plus a look at the Military Police!

For the first time in MetaX, the Launch Kit also contains two playmats – the first of many! 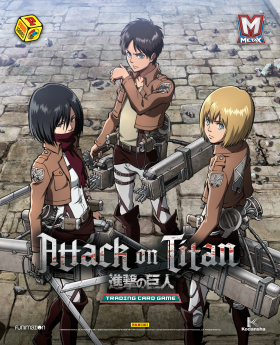 Launch Kits are available to any store running MetaX events during the launch window – contact your distributor for details. If you have any questions about acquiring Launch Kits or regular Tournament Kits, please contact OP@paniniamerica.net.

Today’s previews highlight the most elite military sector of the series, the Military Police. Though there are only a handful of Military Police Characters, these elite units have some of the highest impact effects in the game! 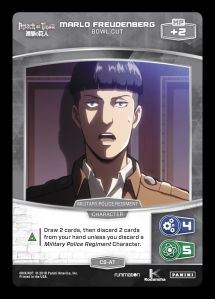 In general use, Marlo is comparable to Cyborg with an alternative Stat distribution. In builds revolving around the Military Police Regiment, he can often generate hand advantage – while also opening up interactions with the discard pile.

Character effects that can KO opposing Characters are seldom seen, and Annie Leonheart’s ability even gets around effects like Aquaman. Annie can play multiple roles in a Military Police deck, as her effect clears blockers while slowing down your opponent’s offense. Some approaches will focus on using this effect as many times as possible, while other Military Police heavy builds can simply include her as another strong card.

Nile Dawk is the most flexible member of the Military Police, scaling well in several archetypes. His ability makes sure that your board will never become clogged in a Military Police build, which allows for more Character drops (and MP) while generating card advantage. He can enable multiple uses of Annie by shuffling her back, and his effect is even able to target himself. As a Character with a maximum rank of 5, he also plays a role in some unique Potpourri builds. 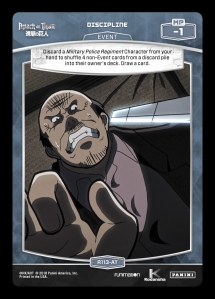 Discipline allows for the largest deck replenishment in the game, allowing for recursion of your key Military Police Characters or Battle Cards. Note that you are able to shuffle back the Character that you discarded to this effect, making its stamped requirement sting a bit less.

In certain decks, this Battle Card will be one of the key targets for Discipline – often drawing 3 cards for 0 MP.

Be sure to watch the fansites below for additional Military Police spoilers, and check back on Friday for a rundown on the Garrison Regiment!

2 thoughts on “Attack on Titan Launch Kits and More Previews! ”