Check below for an individual card spotlight, a look at some tech options, and more teasers from Batman!

If you haven’t submitted your Green Lantern Redemption form, be sure to do so by checking out the sidebar or clicking here. Note: shipments are limited to one per address, while supplies last.

Decks that include a high count of Rank 7 Characters can be vulnerable to effects like Mr. Freeze – Victor Fries and Finisher, but they gain access to one of the best Battle Cards in the game. 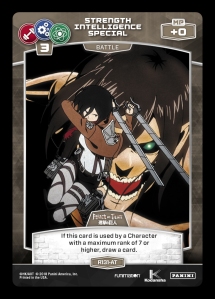 Since it includes all three Stats, this Battle Card can always be played by any Rank 7 or higher Characters to draw a card! This has obvious applications in the Titan Trait, but any top-heavy deck can make good use of this effect. Battle Cards that replace themselves are always valuable, and this comes at no MP cost. In a pinch, this can still be used by practically every Character in the game – and consider maximizing its effectiveness by stacking your deck with cards like Batman – Caped Crusader!

Each card you include in your deck can be thought of as coming at the expense of every other card that didn’t make it into your final list. When evaluating cards from this perspective in MetaX, the relatively small deck size leads to each individual card having a significant impact on the overall identity of your build. With deck slots at a premium, the opportunity cost of running a card that narrowly counters an opposing strategy can appear discouraging – especially when trying to squeeze in stamped/themed effects that promote your deck’s own strategy.

However, tech cards can shore up any weaknesses against specific matchups that give your deck trouble (and they often tip the scales against builds that focus entirely on one aspect)! Seldom seen options include:

Batman spoilers are coming soon – in the meantime, here are four new Character effects from the next set. Can you guess which Trait matches up with each effect?