The big day has arrived. Finally, Panini America’s 2014 Dragon Ball Z Trading Card Game is live. The triumphant return of the iconic TCG brings with it immense excitement and anticipation. Today, we’re here to fuel that excitement with a gallery that takes you pack-by-pack through one 24-pack Booster Box. We’ll follow up next week with a comprehensive video starring game creator Aik Tongtharadol to discuss some of the highlights from the first full weekend of release.

In fact, it was Tongtharadol and our development team who fashioned a must-read list of release-day FAQs to help veterans and newcomers alike. So we’ll lead with that. Stick around after reading the FAQs for the pack-by-pack gallery.

Powers may only be used once per turn, including Drills. However, Drill Powers may be used again if they leave and re-enter play, unlike Personalities/Masteries.

Effects that modify the amount of anger needed to level up do not change the requirements to win by MPPV. For example, you win by MPPV when you reach five anger on level four against Blue Protective Mastery.

The act of Rejuvenating is inherently the top card of your discard pile being placed on the bottom of your Life Deck. Some effects may modify which cards are Rejuvenated and where they are placed.

The effects of Gohan, Armored and Namekian Knowledge Mastery may continually interact with each other as long as you have a card with the word “anger” in the text box in your discard pile.

Saiyan Surprise is not a direct reprint, and should not have gold text for its title.

Orange Searching Maneuver searches for the drill immediately. Reveal it, then set it aside to be placed into play at the end of combat.

Captain Ginyu, Body Change and Captain Ginyu, Frog prevent discarding via critical damage effects (terminology in the rulebook is discard an Ally), but not “destroying” (or other forms of removal) from card effects.

Black Punishment – Treat this card as if it reads “Energy attack costing 2 stages. DAMAGE: 4 life cards. Raise your anger 1 level. HIT: Until the start of your next turn, whenever a card banishes itself after use your opponent destroys the top card of his Life Deck.”

Black Swerve – Treat this card as if it reads “Physical attack. DAMAGE: AT +3 stages. Choose up to two Setups in play. Search your opponent’s Life Deck for one copy of each and destroy them.”

You can also download the FAQs as a PDF document here: FAQv2 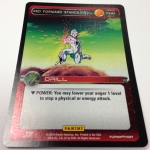