Check below for Launch Kit details and more previews from Batman. 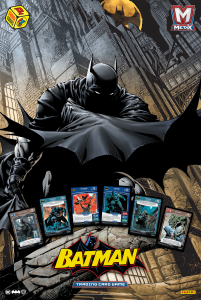 Although Launch Kits are ordered through your store’s distributor, any specific questions about Launch Kits or regular Tournament Kit support should be directed to OP@paniniamerica.net.

Today’s batch of previews revolves around the Arkham Inmates. Foes that have been defeated by Batman often end up in Arkham Asylum (“for the Criminally Insane”), and their lineup includes variants of Characters seen in the Rogues Gallery. In MetaX, their madness is reflected by effects that destroy their own hand – whether it be through powerful abilities that require discarding cards as a cost, things that reward a smaller hand size, or even discard pile tricks!

Killer Croc allows you to aggressively play and discard cards on your turn (while also greatly expanding your defensive options). 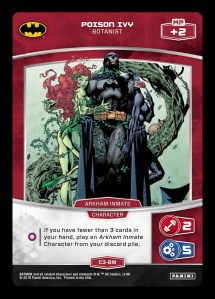 With Ivy in play, feel free to pitch Character cards to your discard effects – and then immediately grow them back from the discard pile with her effect! 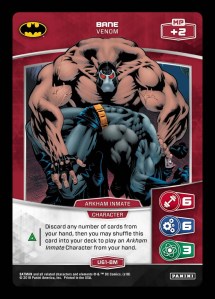 Bane is brawny, but he is also a master planner. Aside from his flexible discard effect, he’ll often act as -1 card from your hand for +2 MP (without interrupting your normal Character play for the turn). In a pinch, he can also stay in play and serve as a warm body.

This is a sadistically powerful effect, but it comes with the steep cost of discarding at least 3 cards from your hand. Of course, having an empty hand is less of a downside for Arkham – and in some scenarios it might be advantageous! 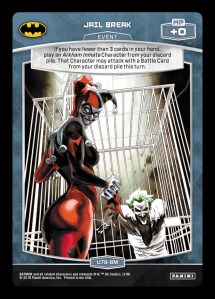 In the same way that other Traits utilize effects that search their deck, watch for several Arkham effects that interact with the discard pile. Jail Break is one such card, and with a simple requirement met it nets +1 card for 0 MP.

Events that KO a targeted Character are scarce, and they usually have high costs or specific conditions. For -5 MP and an Arkham Character discard, you’ll be able to blow away any opposing Character (along with a little bit of regeneration to boot)! 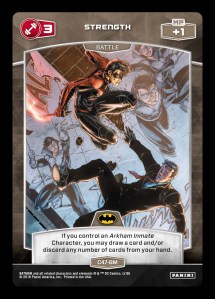 This is a Swiss Army Knife for the Inmates, as it packs both optional draw and optional discard – while gaining a bit of MP! 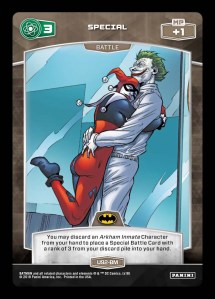 Constantly shedding cards from your hand can create awkward scenarios on defense, but effects like this 3 Special go a long way towards improving your blocking options.

That’s all for now, but we’ll be back on Friday with a look at the GCPD! Until then, you can find additional Batman spoilers here: