See below for a spotlight on the top Battle Cards of the year.

With January rapidly approaching, it’s time to reflect on some of the top performing cards of the year. We’ll cover each card type before 2019 arrives, and today’s focus is Battle Cards:

The gold standard of card filtering, and one of the main reasons to run a Character lineup with access to blue 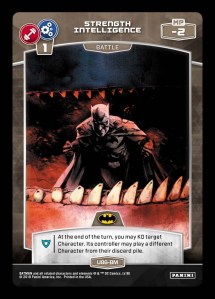 This made a huge impact at Gen Con, and its flexible effect has created competition with the equally ubiqutious 1 STR/INT/SP (U92-JL)

While this card might be waning in an absolute sense, it remains a centerpiece of numerous viable strategies (aggro and otherwise)

This release of this card augmented several pre-existing builds, while unlocking and rewarding countless others

Battle Cards are more universally applicable than Characters or Events, and they require a certain interconnectedness in deck construction. As seen above, the most frequently used “glue” Battle Cards are all highly accessible (no MP cost, low rank requirement, or Multi-stat) and tend to offer effects that increase card quality/consistency.

Finally, Friday wouldn’t be complete without new teasers from Teen Titans Go! – and we’ll stick to today’s theme with three new Battle Card effects below. Check back on Tuesday for the final Deck Tech of the year (with a holiday theme), and watch for the kickoff of our latest giveaway contest at the end of next week!

3 thoughts on “Four for Friday: Year in Review (Part One)!”